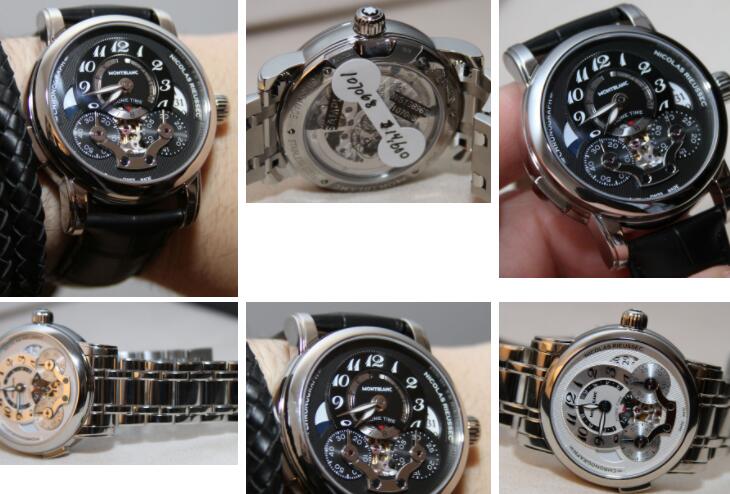 2012 saw the release of a new version of the Nicolas Rieussec called the Open Hometime version. It is an update on the Chronograph Automatic that I previously reviewed. The refinements aren’t many, but in my opinion this is probably one of the best looking Rieussec models today. While it has the same functions as the Chronograph Automatic, inside the Open Hometime is the new caliber R210 movement. What is different? Well the second timezone hand is now a disc, and there are some skeletonized parts on the dial. It is more a variation on the caliber R200 versus something totally new.
The 43mm wide case shape and size are the same, but you’ll notice that Montblanc finally updated the steel bracelet. Originally, the Rieussec borrowed bracelets from “lesser” Montblanc watch collections. Montblanc informed me that it was their wish to design a new, better bracelet for the collection. If you compare the bracelets on this watch and the one on the models I reviewed a while ago, you’ll see the difference. The new bracelet is certainly better suited to the design of the Nicolas Rieussec watch case. In addition to the steel Open Hometime model, there is an 18k red gold version available as well.

Through the rear of the case you can once again see the movement. Appearance wise, the R210 is similar to the R200. Functionally the movement is quite useful. It has a monopusher column-wheel based chronograph that uses moving discs. There is no running seconds hand. The automatic movement has a power reserve of 72 hours and also has the date, day/night indicator, and a second time zone. The R200 movement has the second time zone displayed as a second hour hand on the main time dial (which is off-centered). The R210 uses a disc instead of a hand, and the second time zone is displayed at the bottom of the time dial.
In addition to having an open view of the movement on the dial, much of the face is done with a machine engraving-like decorative design. It looks very nice and fits the overall theme of the Nicolas Rieussec collection very well. One of the things that I’ve noticed about the Nicolas Rieussec collection is that it is one of the most uniquely designed timepieces that you can wear daily. That means it is comfortable and convenient enough for full-time use on your wrist, but has a very distinctive and unique design at the same time. It is still pricey though, but not outrageous for the features and feature-rich in-house movement. In steel, the Montblanc Nicolas Rieussec Open Hometime