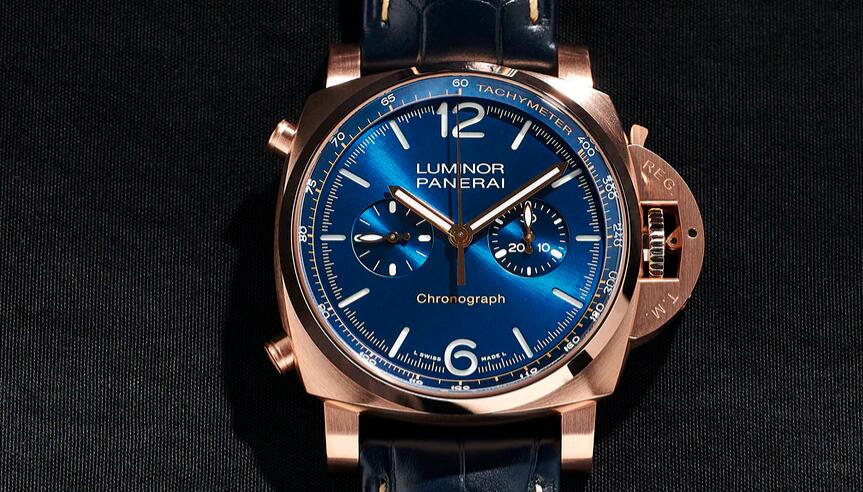 Panerai’s major initiative at Watches & Wonders Geneva came in the form of a two-pronged approach to sustainability. On the one hand, it released the Submersible eLAB-ID, a concept watch made of 98.6% recycled-based materials, along with an open-source list of suppliers that other watchmakers can use to make their own recycled watches. And they backed up the concept with a commercial launch, the recycled-based Luminor Marina eSteel. Those are just two of the things they had for the virtual Watches & Wonders Geneva show. There was also an all-new downsized Bronzo – now a very wearable 42mm – and a line-up of automatic steel chronographs debuting the new P.9200 automatic chronograph caliber.
Panerai’s 2021 push into chronographs, a complication that goes back to the original Mare Nostrum, continues into the live Watches & Wonders show taking place this week in Shanghai (April 14-18). While the first models to feature the P.6200 were stainless steel and featured a closed caseback, the watches we have today are made of Panerai’s proprietary Goldtech alloy and have a sapphire back – though it is partially obscured by a wave motif.
The Panerai Luminor Chrono Goldtech Blu Notte, or “Blue Night,” is a big 44mm in diameter. With the trademarked Panerai Luminor crown protection device and a set of sturdy lugs, it’s an imposing watch as you’d expect of a Panerai Luminor.
Not that one would necessarily want to swim with an 18-karat gold chronograph, but it’s worth noting that the water-resistance rating of the new PAM 1111 is 50 meters, so it’s probably best to stay on deck or land. The steel versions of the new P.9200 automatic chronograph that Panerai has so far presented feature closed backs (and are about half a millimeter thicker), offering a more robust package for those who actually want to get their watches wet. While PAM 1111 is being sold on a deep blue alligator strap that echoes the dial, Panerai is throwing in a rubber strap.
As you no doubt noticed, the rose gold in the Blu Notte case is Panerai’s proprietary Goldtech, a special alloy with a higher percentage of copper and platinum. In addition to providing a deeper, darker color, it’s also resistant to fading, a nagging problem for watchmakers working with rose gold. Several brands have their own alloys created with colorfastness in mind, most famously Rolex with its aptly named Everose Gold.
Taming time, pacing epic competitions, synchronizing heroic missions: they are weighty responsibilities that hold success or failure in the balance, and therefore must be entrusted to tools with advanced mechanics. It is a world of precision and performance in which Panerai has distinguished itself since the 1940s. Today the brand reaffirms its role in the sphere of chronography.
Panerai Luminor Chrono Goldtech Blu Notte began perfecting its expertise in the category as early as 1943, the reference year of the Mare Nostrum project, a model designed to serve the deck officers of the Italian Navy, developed only to the prototype stage, one of which is carefully preserved in the Panerai museum in Florence. Its mastery has extended into the 21st century, with the introduction of a series of efficient, high-performance new proprietary calibres developed by the research and development department within the Neuchâtel manufacture, the legendary Laboratorio di Idee, a hub for innovation and avant-garde imagination.
The sporting complication par excellence, Panerai’s return to the field of chronographs is enhanced by the preciousness of Panerai Goldtech, a type of gold distinguished by high percentages of copper and platinum, the metals responsible for its intense color, and heightened resistance to oxidation. This alloy lends an aesthetic dimension and mechanical properties that do not go unnoticed in the Panerai Luminor Chrono Goldtech Blu Notte (PAM01111).
A specimen with a precious and refined essence balanced by the powerful pro le of the iconic Luminor case, its sporty features include chronograph buttons, diverted to the left of the case, a complement to the crown protecting bridge and as a tachymeter scale on the flange, useful for calculating the average speed over a predefined distance, in kilometers or miles.
Shielded by a smokey sapphire glass window, integrated into the case-back and decorated in a wave pattern through a metallization process, the movement is the new Caliber P.9200, solid and reliable. The self-winding chronograph features a 42- hour power reserve, resulting from the energy stored inside a single barrel.
Water-resistant up to 5 bar (about 50 meters deep), the Panerai Luminor Chrono Goldtech Blu Notte is paired with a deep blue alligator leather strap fitted with a trapezoidal pin buckle in brushed Panerai Goldtech. An additional technical rubber strap, also in deep blue, multiplies the opportunities to customize the model as does a screwdriver for its replacement and removal of the buckle.