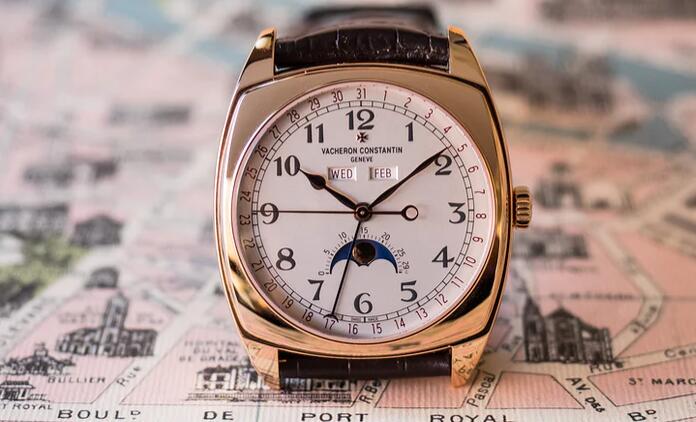 The release of 10, count ’em, 1o new references in the Vacheron Constantin Harmony collection gave us a chance to take a second look at the Harmony Chronograph – a flagship monopusher chronograph with an in-house movement, and some unusual and, we think, unique technical features. Most of the watches recently announced, however, have been essentially incrementally changed versions of existing watches. But there is one watch that is entirely new to the Harmony collection, and that’s the Vacheron Constantin Harmony Complete Calendar.

The Vacheron Constantin Harmony Complete Calendar is so called thanks to its calendar indications, which show the day of the week, date, month, and both age and phase of the Moon. Believe it or not, this is actually a rarer complication in Vacheron Constantin’s collection than either an annual or perpetual calendar – the annual calendar, which does not have to be corrected at the end of any month, except once a year in February, is represented by the Quai de L’Ile Annual Calendar, and there are actually 14 diifferent perpetual calendar models, so if you want to stand out in a gathering of Vacheron collectors this might actually be the watch to get.

This complication is also sometimes called a triple calendar (same basic rationale for this term as for “complete calendar” obviously) and collecting triple calendars has been its own niche for some time in vintage watch collecting, with relatively rare movements like the triple calendar Valjoux 88 usually commanding a premium. The last time I can recall Vacheron launching a complete/triple calendar watch is all the way back in 2003, with the Toledo 1952. The movement used was the caliber 1125, which appears to have been a Vacheron-finished Jaeger-LeCoultre caliber 891.

I liked that watch very much when it first came out and then lost track of it completely, and was surprised (and a little saddened) to see that it’s not in the catalogue any more. The original 2003 release came in yellow or white gold, and also in a limited edition of 100 platinum pieces, one of which was purchased by VC’s executive board as a gift to then-CEO Claude-Daniel Proellochs, who had been CEO since 1988, and who passed away in 2011. It’s great to see this somewhat less elevated, but still very aesthetically attractive calendar complication, back in Vacheron’s collection.

The movement is Vacheron’s in-house caliber 2460 QH. This is a 29mm x 5.40mm automatic movement, running in 27 jewel at 28,800 vph, and carrying the Geneva Hallmark, which, since the requirements were updated in 2008, is awarded by an independent entity known as Timelab. Incidentally, the Geneva Hallmark’s update in 2008 ended a 123-year period in which it had been administered by the Geneva School Of Watchmaking, and also marked the beginning of the implementation for quality controls for the entire cased watch, rather than just the movement.

Caliber 2460 represents some interesting horological history: It is an evolution of Vacheron Constantin’s very first in-house produced and designed automatic movement. That movement is the caliber 2450, which Vacheron first introduced in the Patrimony Collection, in 2007. Design of the movement had begun under the administration of Proellochs, and after his retirement in 2005 (after overseeing Vacheron Constantin’s 250th anniversary celebrations) its final production and release were overseen by Vacheron’s current CEO, Juan-Carlos Torres.

Vacheron Constantin was considered an haute horlogerie company for many decades, despite its not having its own in-house automatic movement, which tends to reinforce the view that in-house is, as in-house does; by itself, it tells you almost nothing about the actual quality of a watch.

As mentioned in our coverage of the watch at launch, the Harmony Complete Calendar retails for $41,000. At this level of watchmaking I think it’s a lot of bang for the buck. Of course, this is all relative; there is a limited degree to which you can ascribe bang-for-the-buck-ness to a $41,000 watch, but bearing in mind how it stacks up next to other watches in this price range, I think there’s a lot on offer in terms of design, an interesting connection to Vacheron’s history both technically and aesthetically, and just plain old general visual pizzaz.

This is definitely a watch that could and should be worn every day, despite its indisputably luxurious vibe. So much of the pleasure of a complete calendar is seeing its face change with the passing of days, dates, and the cycles of the moon; and the general execution here is so nice, I don’t think watching the years go by with this watch would be a hardship at all. This is a very welcome return of a – if not high, still certainly classic and attractive – calendar complication to Vacheron’s collection.