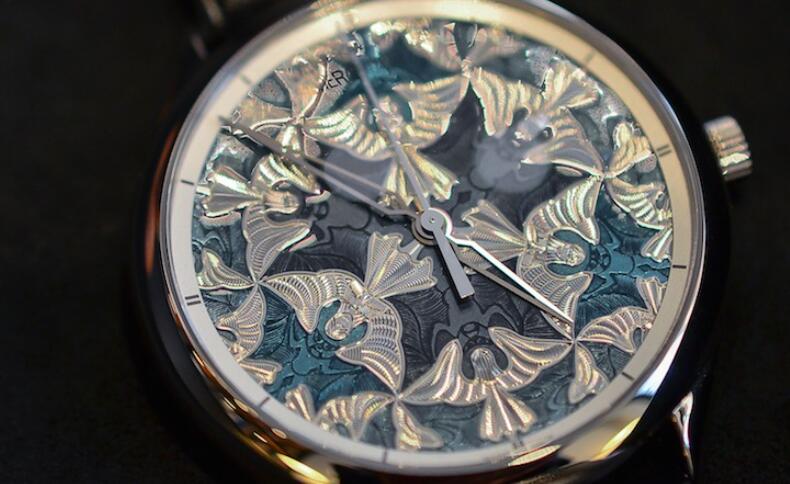 When you look at Vacheron Constantin Metiers d’Art collections, one is clearly apart from the rest, a range of very high end watches that are not showing the horological capacities of the manufacture but some ornamental skills: the Metiers d’Art. In traditional watchmaking, Metiers d’Art watches (that stands for artistic workmanship) consist in bringing all of the finest aesthetic competencies in a single watch. It can include enameling, engraving, gem-setting or marquetry. To explain you what is the Vacheron Constantin Metiers d’Art collection, we get our hands on with one of the nicest example, the ‘Angel Watch’.

Enameled, engraved or guilloché dials are quite usual in Haute Horlogerie, even if they required highly qualified crafters. We already show you several examples of enameled dial, such as the milky white Sarpaneva Emali or the translucent Julien Coudray. Same goes for the hand-engraving technique such as used by Konstatin Chaykin in the Carpe Diem. But only a few manufacture are able to bring all of the techniques in a single watch and to keep it elegant and discreet enough.
Vacheron Constatin had presented the ‘Univers Infinis’ collection in 2012 as a limited, numbered series of 20 watches for each of the 3 models. it is inspired by the work of the Dutch artist Maurits Cornelis Escher, known for its use of artistic geometry and tessellation – a technic that consists of small interlocking forms creating a motif that occupies the entire space of a picture without leaving any gaps. The Vacheron Constantin ‘Angel Watch’ uses cleverly such a process to create a pattern of two distinct elements: Angels and Demons. At first sight, you may only notice the bright silvered angels, but if you look closely at the dial, you’ll discover that the dark gaps between them are actually demons. A very nice example of a recurring pattern that hide a second one, infinitely multiplied and radiating out from a central point.
The dial of the Vacheron Constantin Metier d’Art ‘Angel Watch’ uses three different Arts: engraving, enameling and guilloché. Working with a white gold base, the engraver first traces the outlines of the figures and then hollows them out as cells using the champlevé technique. Next comes the copperplate engraving that defines the details of the demons. The enameller fills the cavities thus hollowed out, an operation requiring infinite precision in that the repetitive symmetry of the pattern simply cannot tolerate even the tiniest flaw. After several firings in the kiln, during which the grey and blue colours are progressively set in place, the artisan applies a final layer of translucent enamel to the imps in order to accentuate the depth of the engraved motifs. The guillocheur then moves into action to craft the angel robes and wings by patiently incising the colourful material. It is extremely rare that guilloché work on an enamelled model is done as the last phase, precisely due to the extreme complexity of such an operation, since any slip of the tool could jeopardise the precious work of an entire team of artisans.
The result is a very finely executed pattern that shows a great depth, some very nice but discreet reflections and multiple layers. No element of the watch can trouble the view on the dial. The 40mm 18K white gold case is reduced to its simplest but very elegant form. Same goes for the light and discreet skeletonized hands that don’t overload the dial. However, they present an interesting finish with two different polishing – mirror on one side and brushed on the other – to help the legibility.
Unlike some brands that will focus exclusively on the dial, Vacheron Constantin comes with very high horological standards, even in the Metiers d’Art collection. The ‘Angel Watch’ features the self-winding Calibre 2460 SC, an in-house movement certified by the Hallmark of Geneva. It shows impressive details, such as a guiloché 22K gold rotor, hand-made Geneva stripes and bevelled angles on all the bridges. It may be a simple Hours – Minutes – Seconds movement but it’s a pretty good one.
The Vacheron Constantin Metier d’Art ‘Angel Watch’ is a very unique watch while strapped on the wrist. It is clearly a dress watch but with a unique sense of arts and aesthetics. It is an object that you’ll have to assume, because how discreet and elegant the dial is, it won’t fit everyone’s tastes. But it shows the impressive skills of the manufacture without being showy.