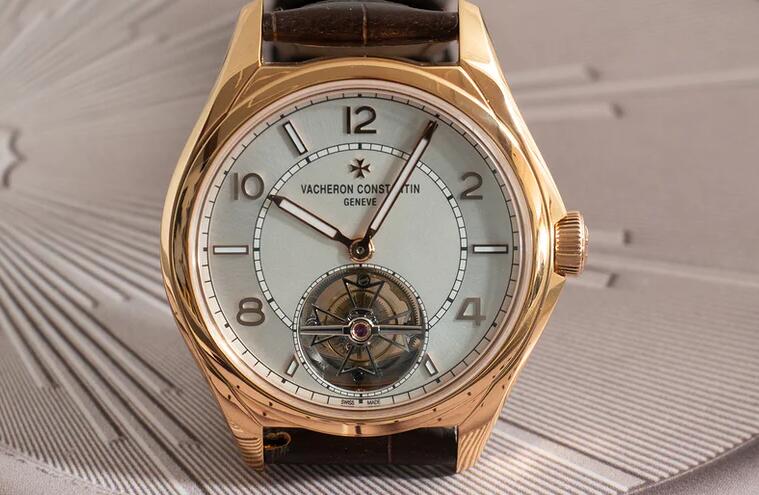 The Fiftysix Collection launched at this year’s SIHH with the mission of bringing to Vacheron Constantin’s lineup, some of the mid-20th century swing that characterized some of the company’s most interesting work from the 1950s. In particular, the Vacheron Constantin FIFTYSIX Tourbillon Collection takes its inspiration from Vacheron Constantin’s ref. 6073, which had very distinctive faceted lugs that have been reproduced in the new Fiftysix models. Now, Vacheron’s taken one of its most interesting movements and placed it in a Fiftysix case – that movement is the caliber 2160, which is a self-winding tourbillon movement with a peripheral winding rotor, and which was first introduced in the Patrimony Traditionnelle Tourbillon earlier this year.
The addition of a tourbillon to the Fiftysix Collection came as something of a surprise, as the collection overall seemed to have, at least at launch, a somewhat more approachable feel that seems a bit at odds with the elevated aura of the tourbillon. Details like the Arabic numerals, sector dial, and luminous hands and dial markers were certainly a departure from the presentation of the tourbillon in Vacheron’s other collections, where Breguet’s invention is generally either wedded with one or more of the traditional high complications, or when presented on its own, handled in an unswervingly classical fashion.
However, I think that’s probably the whole point of offering a tourbillon in the Fiftysix Collection – it’s a way for Vacheron to show off the versatility of the basic design, as well as to offer a tourbillon in a design that’s a bit more in line with the company’s history of, after World War II, producing wristwatches with design-forward elements that deviated from some of the strict classic codes of Swiss fine watchmaking.
It’s a fairly daring move, but an interesting one – Vacheron Constantin can certainly produce a picture-perfect example of a classically designed tourbillon if it has a mind to do so (just check out Jon Bues’s in-depth coverage of the Patrimony Traditionnelle Tourbillon for an example) but putting its two main competencies together – extremely traditional high-end watchmaking, and style-oriented design – is something that it’s done seldom if at all in recent years, and I think this watch represents an attempt on the part of Vacheron to synthesize those two aspects of the company in a single watch.
Technically, the Fiftysix Tourbillon has all the interest of the Patrimony Traditionnelle Tourbillon – peripheral rotor automatic winding systems remain a relative rarity in modern watchmaking, and of course in the context of a watch with high end movement finishing as part of its value proposition, the system, in addition to its technical attractions, allows the owner an unimpeded view of the movement. The Fiftysix Tourbillon represents both a redefinition and repositioning of the Fiftysix Collection – which is now being proposed as a vehicle with potential for the presentation of high complications as well – and for Vacheron, a new strategy for presenting a tourbillon.
At the SIHH 2018, Vacheron Constantin FIFTYSIX Tourbillon introduced a brand new and important collection for the brand, the FIFTYSIX. With a clear intention to renew the clientele and to bring younger and less hardcore-oriented potential customers, this watch mixed vintage elements with a modern, masculine and slightly casual design. Presented in 3 different version (automatic, day-date, complete calendar), each of them available in steel or gold, it’s time now for the FIFTYSIX to up the game and to receive true Vacheron Constantin savoir-faire. This has just been done with the addition of a high-end, automatic peripheral tourbillon movement.
In our review of the complete calendar version, we explained why we had been sceptical about this new collection. It was more an issue of “wrong first impressions” based on 3D renderings of the watch and a slightly “hipster” communication campaign, rather than an issue with the watch itself. Certainly, this collection isn’t perfect and could be perfected on some minor details (a bit thinner…) but overall, it is one very pleasant timepiece – or 3 very pleasant watches. We tested it and we liked it. Period.
What is FIFTYSIX collection about? Well, in short, a diversification programme for Vacheron Constantin – a way to attract new customers, younger collectors and a more “lifestyle-oriented” clientele. How to do it? First, play on the vintage trend with a watch inspired by the ref. 6073 produced in 1956 and with a dial playing on the “sector” trend. Mix this with modern proportions, a casual style, automatic, reliable and convenient movements, rather simple complications (day-date or complete calendar) and mainly, offer the watch in stainless steel – so the automatic version can retail for just under EUR 10,000 before taxes.

So now, we move to the other end of the spectrum with the addition of a tourbillon. Does that sound in line with the previous strategy? Not entirely, however, it has to be seen as a flagship model rather than a “cash cow” product. After all, Vacheron Constantin is one heck of a manufacture and the tourbillon complication is one of its specialities.
The evolution from a simple automatic watch to a complex tourbillon piece is rather discreet. Overall, it’s the same watch with a different movement. Thus, the Vacheron Constantin FIFTYSIX Tourbillon is still a FIFTYSIX all around.
First change compared to the Automatic edition concerns the size of the case, that jumps from 40mm to 41mm, in order to make some room for the large movement and for the tourbillon on the dial side. Not an issue, the increase in size will certainly be just about imperceptible once on the wrist. The shape is the one used on the rest of the collection, with an unusually shaped case with integrated lugs, straight flanks, a slightly recessed crown and, something that is the norm at VC, beautifully designed lugs.
The design is the same as the other editions: an interesting mix of elegance with a hint of casualness, a well-balanced blend of vintage elements (box-shaped sapphire crystal, lugs reminiscent of a 1956 model) and modern proportions. The case is quite compact and relatively thin at 10.9mm. The shape of the inter-lugs is pleasant and perfectly integrates the strap into the whole design. This tourbillon version of FIFTYSIX is launched in 18k pink gold only – at least for the moment.
As for the dial, no dramatic evolution either. This tourbillon version remains in line with what we’ve experienced in the past – with the addition of a large hole in the dial and a tourbillon inside, of course. We have the nicely finished two-tone dial, with a central opaline (matte) silvered surface and an hour ring that is brushed. The dial is lively and easy to read, with perfectly dimensioned tracks and hands and well-structured areas. Hands and indices are all 18k polished pink gold and filled with luminous material – again, to bring a slightly more casual look to the watch and more practicality on a daily basis.
The large aperture at 6 o’clock on the dial reveals a perfectly finished tourbillon bridge and cage. As usual, the tourbillon is held in place by a black polished transversal bridge, with a rounded surface (a time-consuming part to decorate) and a cage in the shape of a Maltese Cross, also black polished with multiple sharp, internal angles that can only be done by hand.

Powering the Vacheron Constantin FIFTYSIX Tourbillon is a well-known movement, calibre 2160 – this movement was already used in the Traditionnelle collection. Following the idea of “daily usability” of the collection, the movement is automatic, but not simply automatic. It features a complex solid gold peripheral rotor, which allows for an uncluttered view of the movement and a thinner profile. This calibre 2160 beats at a traditional 2.5Hz frequency – standard for a tourbillon – and boasts a comfortable 80-hour power reserve.
The view through the caseback is highly satisfying, with beautiful finishing and detailed decoration – polished bevels, internal anglages, thin Geneva stripes, polished screw heads and sinks… The movement and the entire watch are certified by the Hallmark of Geneva, which guarantees a high level of precision and the standards for the decoration of the movement.
Altogether, the Vacheron Constantin FIFTYSIX Tourbillon remains in line with the rest of the collection and relies on the cool design attributes of this fresh watch. It just adds a fascinating tourbillon movement, in the vein of what VC is capable of doing. The price is, of course, steeper than the rest of the collection, at EUR 118,000. It will be a boutique-only edition.