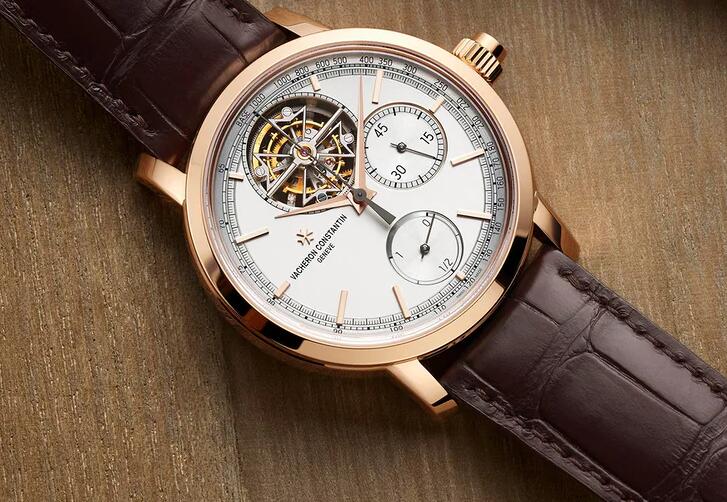 The product of a special project from within Vacheron Constantin’s Grands Complications workshop, this is the stunning new Vacheron Constantin Traditionnelle Tourbillon Chronograph. It’s a monopusher chronograph with a gorgeous tourbillon cased in a subtle and dressy pink gold case. It’s hand-wound, gloriously complicated, and oh-so-pretty. It’s Vacheron’s reminder that, unlike tradeshow season, high-end watchmaking is far from canceled in 2020.
Click an image and scroll around a bit in the details. While I am far from a champion of the tourbillon, if you’re going to include one, make it like this. Make it worth looking at. This watch is a delightful combination of the Traditionnelle Tourbillon and a 45-minute monopusher chronograph. While we’ve seen several Traditionnelle models with tourbillons, and indeed a chronograph-equipped perpetual calendar from within the family, this is the first time they’ve combined these two functions, and I think they came together with aplomb.
Coming in at 42.5mm wide and 11.7mm thick, the Vacheron Constantin Traditionnelle tourbillon chronograph Replica (reference 5100S/000R-B623) is in the middle range in terms of sizing for a watch from the Traditionnelle family. The case is made of 5N red gold and is fitted with a display caseback so you can see each of the 292 components brought together to create the caliber 3200 movement. While the styling is well within the norm for an upper-tier VC, there are details here that really elevate what was already a lovely project.

Take a closer look at the sunken subdials for the chronograph and the power reserve at six o’clock (that little shadow is so nice), at the wide tourbillon aperture (which also doubles as the small seconds display), and at the slight asymmetry between the size of the tourbillon, the placement of the dial text, and the visual weight of the two subdials. Surrounded by both a railway minute scale and a traditional but subtle tachymeter scale, this is one I cannot wait to see in person (if only to push that sweet lonely button).
With watches like the Les Cabinotiers Minute Repeater Perpetual Calendar and the jaw-dropping Traditionnelle Twin Beat, Vacheron Constantin has been on a roll these past few years, so it’s of little surprise that they would have a few exciting pieces to announce – with or without a traditional tradeshow in Geneva. For those waiting on the other shoe, the $197,000 pricing matches both the brand and the specs. And really, did you expect any less?
As part of the Holy Trinity (of Watchmaking), you can expect Vacheron Constantin to have a long history of producing the world’s finest tourbillon watches. From the Saint-Gervais timepiece, that combined a perpetual calendar and a 250-hour power reserve, to the famous and rare Tour de l’Ile timepiece, that was named for the historic home of the company’s name sake, we can confirm that the company is well-versed in the complication. But, the new 41mm Vacheron Constantin Patrimony Traditionnelle Tourbillon goes above and beyond anything seen in the history books.
To give you a little more of an idea for how far this new timepiece has come, we must first look at it’s predecessor, the Patrimony Traditionnelle 14-Day Tourbillon. Released at SIHH in 2012, the 14-Day debuted a stunning tourbillon mechanism with a cage inspired by the brand’s emblem, the Maltese Cross, that also increased the case height of the timepiece out of the range of ultra slim. At the time, it also showcased a classic 42mm dial and an impressive two-week power reserve on a manual winding movement.
Unlike the former, the Vacheron Constantin Patrimony Traditionnelle Tourbillon features an automatic movement with an 80 hour reserve – and yes, we did the math. While that may seem like a negative selling point, remember that this type of moment is constantly being wound as you move throughout the day which means you don’t need to stop to reset the time. The new Vacheron Constantin Patrimony Traditionnelle Tourbillon showcases a peripherally mounted 22k gold rotor engineered allow for a slim profile (5.65mm to be exact) while still allowing the owner to sneak a peak at the movement. This peripheral rotor tourbillon, a combination not often seen in the market, is located at the 6’o clock position and is the cherry on top to Vacheron’s own caliber 2160. The rotor is finished with hobnailing, the company’s name and the Maltese cross and the entire movement was developed in compliance with the criteria that allows the watch (and the brand) to carry the Hallmark of Geneva.
As the newest edition to the Patrimony Traditionnelle family, this timepiece continues the simplistic look and feel that characterizes the collection. Other than the viewport for the tourbillon complication, the silvered opaline dial features the company’s name and Maltese Cross at the 12 o’clock position. It’s also adorned by rose gold hands and a printed track for minutes and seconds. Available in rose gold and limited edition platinum, the timepiece is completed with a transparent caseback, sapphire glass and dark brown alligator strap with a deployment buckle. One thing to note is that while a 41mm diameter might seem large for a gentleman’s dress watch, but in our opinion the quality of design and proportion of details allow for easy wear on the wrist.