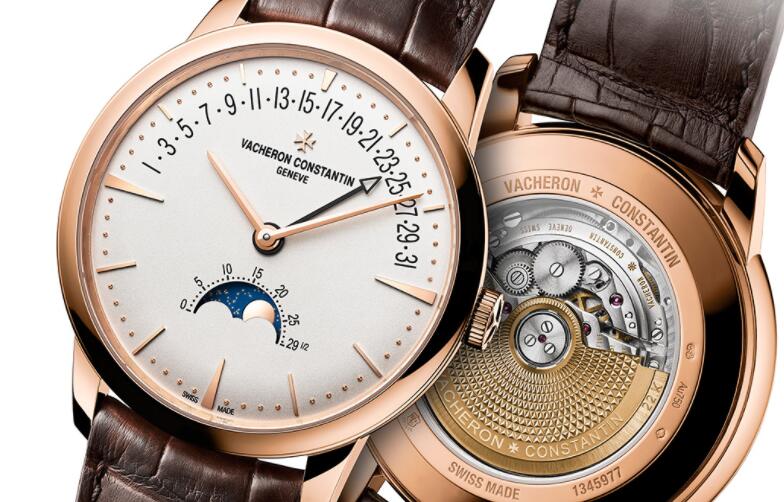 How time flies, we are nearing the end of September, which means SIHH 2017 is just months away and the Richemont brands are beginning to tease their new offerings that they will show off next year. Taking the lead is one of Richemont’s premier brands, Vacheron Constantin. And one of the new watches that the 261-year-old brand will be presenting next year is the new Vacheron Constantin Patrimony Moon Phase Retrograde Date watch.

The Patrimony collection represents models inspired by Vacheron Constantin’s past, specifically from the 1950s. And so it should be no surprise that pieces from the Patrimony collection are marked by their classic and timeless designs.
The new Vacheron Constantin Patrimony Moon Phase Retrograde Date watch is no different. The case is a very classic-looking round one with very modest dimensions. It’s 42.5mm wide and is just 9.7mm thick. And it will be available in either 18K white gold or 18K 5N pink gold. Water resistance is rated at just 30 meters, which is pretty normal for dress watches.
The Vacheron Constantin Patrimony Moon Phase Retrograde Date watch is the second model in the Patrimony range to feature the retrograde complication – the first is the Patrimony Retrograde Day-Date. The dial is silvered opaline, and the retrograde date display is visible across 9 to 3 o’clock.
Just above 6 o’clock is the moon phase display that is so accurate that it’s only off by a single day every 122 years. Interestingly, the moon disc is rendered using the same gold alloy as the case. So the 18K white gold model will have a white gold moon disc, while the 18K 5N pink gold model will have a matching pink gold disc. The hands, applied hour markers, and circular “pearl” minute track will also be rendered in the same gold alloy as the case, giving the entire dial a very harmonious and consistent look and feel.
Inside beats Vacheron Constantin’s in-house calibre 2460 R31L, which is visible through the sapphire case back. It features 275 components, 27 jewels, and is just 5.4mm thick. It beats at a very modern 28,800 vibrations per hour and provides 40 hours of power reserve. And since the watch has been certified by the Hallmark of Geneva, the movement is suitably well-finished, with chamfered bridges, polished jewel holes, and polished screw heads. Unfortunately, much of the movement is blocked by the large 22k gold rotor.

One benefit of this calibre 2460 R31L is that the date and moon phase displays can be adjusted using the crown, without the need of a stylus to push on correctors like some other retrograde watches.
Taken as a whole, the new Vacheron Constantin Patrimony Moon Phase Retrograde Date watch is a handsome and interesting addition to the Patrimony family. Personally, I’m more fond of this new watch than the older Patrimony Retrograde Day-Date, as the dial is cleaner and certainly more harmonious. The Retrograde Day-Date’s day display has a shortened “Thurs” that I find to be absolutely unforgivable. The Vacheron Constantin Patrimony Moon Phase Retrograde Date replica watch will make its debut at SIHH 2017

One of the things that you learn again and again in reviewing, and looking at, and writing about watches is the importance of withholding judgement until you’ve actually seen a watch in the metal – and moreover, had a chance to wear it and see what it’s like to operate it. This was definitely the case for me with the Vacheron Constantin Patrimony Moonphase And Retrograde Date, which seemed an almost simplistic watch at first but which has a lot of small details that taken together make it a very enjoyable watch to discover and also, show how Vacheron’s approach to watchmaking differs from that of its contemporaries and competitors.
Over the years, Vacheron Constantin has made the retrograde date something of a signature complication. The first retrograde date watch from Vacheron was the reference 47245, made in 200 (the “245” refers to the company’s 245th anniversary which was celebrated that year). This was a round cased watch in the Patrimony collection which featured a day-of-the-week display at six o’clock, and a 31 day retrograde date display. Interestingly the retrograde date is relatively little used by Vacheron’s competitors; Lange has none in its current catalogue (though it does have the Lange 1 Daymatic, which has a retrograde day hand). Patek does use the complication but only occasionally and then only (as far as I can tell) in perpetual calendars; and Audemars Piguet like Lange seems to have none in its current lineup.
Reference 47245 set the basic blueprint for retrograde date watches from Vacheron: a 31 day track covering the upper half of the dial from 9:00 to 3:00, with an area underneath that can be used as a location for a day of the week indication, moonphase or what have you. In 2002 Vacheron used the retrograde date in a perpetual calendar for the first time: the Malte Retrograde Perpetual Calendar. In 2007, the firm launched the Patrimony Contemporaine Bi-Retrograde, which has a retrograde date as well as day indicator and that watch is still part of the current collection, as the Patrimony Retrograde Day-Date. The current catalogue also includes a retrograde date annual calendar, in the Quai de L’Ile collection.
For much of its history Vacheron Constantin has shown an interest in perhaps more obviously creative aesthetics than its competitors and not only in such things as case and dial design. The retrograde date complication is just one of several unusual time display systems Vacheron has used over many years, including the so called bras en l’air watches (in which the hours and minutes are pointed to by two retrograde hands that form the arms of a character on the dial, hence the name) digital time and date displays, and the wandering hours complication as seen in these examples from the Metiers d’Art Collection.
The basic arrangement of the dial elements in the Patrimony Moon Phase Retrograde Date are familiar from the Contemporaine Bi-Retrograde. One of the key elements compositionally in addition to the retrograde date sector itself, are the hour markers at 3:00 and 9:00, which serve to visually divide the upper and lower halves of the dial, and which almost seem to divide it into solar and lunar sections – the upper half devoted to the day and the lower to night.The minute track consists of applied “pearl” markers, and the retrograde date hand is an open arrow tipped charcoal black, easily distinguished from the beveled hour and minute hands; reading the time and date is very straightforward and despite the inherent visual complexity of the date indication, the dial feels uncluttered and indeed, almost spare. This despite the fact that there are actually four different shapes for the hour markers, plus the minute track plus the date indication.
The moonphase indication is very traditional in most respects. You can see the phase of the moon and also read off its age (that is, where you are in the synodic month) off the numbered scale. The moonphase indication in this case is a high-accuracy one; it’s correct to a margin of error of one day every 122 years. One of the unique features of the Patrimony Moon Phase Retrograde Date is that you can actually set the moonphase indication via the crown, which is a small innovation but a real one; I can’t recall any other watch in which this is possible (well, with the exception of coordinated, crown-set perpetuals like the IWC Kurt Klaus perpetual calendar but in that case, you are advancing all indications simultaneously, not setting the moonphase separately).
One other small detail that it would be easy to miss at first glance is that the stars around the moon disk aren’t randomly placed – there are minute lines connecting them and they’re actually a representation of some of the major Northern Hemisphere constellations. Again, a small thing in itself but one of those details that adds considerably to the charm of the watch once you know it’s there.

The movement is also new: caliber 2460 R31L. This is not an all new movement by any means; it’s derived from the Vacheron caliber 2450 which when it was introduced in 2007 to much fanfare, was actually the very first completely in-house automatic caliber Vacheron Constantin had ever produced. Cal. 2460 was introduced at the same time with the retrograde date module, in the Patrimony Bi-Retrograde. However, 2460 R31L does introduce the high-accuracy moonphase as well as the ability to set the moonphase by the crown. In the first position, the crown is used to hand-wind the movement; in the second, you can turn it in one direction to set the moonphase and the other to set the date; the third position is for setting the time.
The mechanisms for the retrograde date and high accuracy moonphase are both under the dial. At about 2:00, you can see the snail cam that controls the position of the retrograde date hand. The snail cam is mounted on a date wheel with 31 teeth, and there’s a foot on the rack which is moved by the advancing of the date wheel and the cam, once per day (the date wheel is held in position by the jumper spring running across the top of the movement). When the date switches at midnight on the 31st, the rack drops back to its lowest position and this causes the date hand to jump back to 1.

Finish and the overall impression the movement gives are pretty much exactly what you would expect from Vacheron. There is little of overt pyrotechnics; the basic roots of this movement are in the world of high grade, flat, elegant, versatile automatic movements of an earlier era and it has much more in common with mid-to-late 20th century slim watch movement aesthetics than it does with anything from the 21st century. All functional surfaces are very cleanly finished and the movement has the sort of reassuringly consistent quality that seems eager to make you not concern yourself with quality, like a perfectly made martini at your favorite bar that never varies but also, and for that reason, never disappoints.
On the wrist, it’s got a slight, more-than-the-sum-of-its-parts glow I find very attractive. It’s one of those watches you feel like you could slip into every day; something of really good but unassuming quality that perhaps, doesn’t excite passion or infatuation but does inspire respect, and which over time reveals unexpected beauty. The one thing I will say is that at least in the abstract I wish it were a little smaller – the case is 42.5mm x 9.7mm – but at the same time, abstraction aside I didn’t find it overlarge while wearing it which I was able to do for several days. With less white space it might seem a little fussy for its own good.