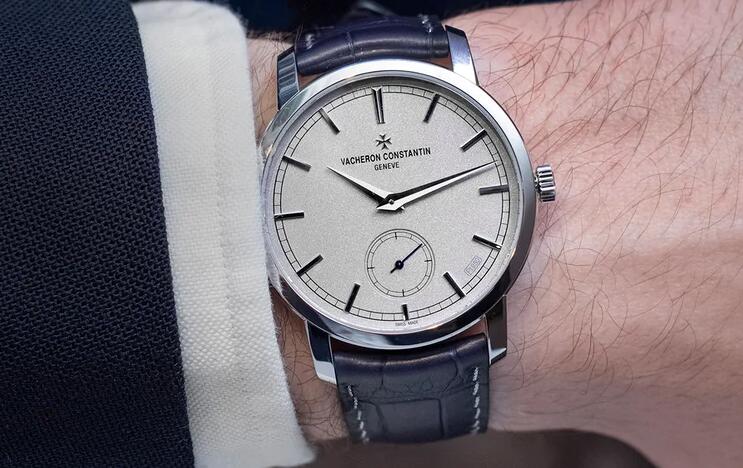 It was just yesterday that I told you one of my favorite watches of SIHH 2019 was one that I had to keep a secret at the time. Well, let’s make that two of my favorite watches. While looking around the Vacheron Constantin Patrimony manual-winding booth ahead of my appointment, amongst the Twin Beat, Overseas Tourbillon, and Overseas Perpetual Calendar I spotted this: a simple time-only beauty that I had never seen before. When I asked, I was told that the Traditionnelle Manual-Winding Collection Excellence Platine was still a secret and I was politely asked to please keep it under wraps until further notice. Yesterday I got that notice. Lucky you.
As a bit of background, the Collection Excellence Platine is a special series of watches that dates back to 2006 at Vacheron. Released every so often, the pieces are all limited editions and they’re all dedicated to showing off platinum and what can be done with the metal. In the past this has included variations on the Traditionelle Complete Calendar, the Traditionelle World Time, the Patrimony Day-Date And Power Reserve, and more. What unites all of these watches is that basically any component that can be made out of platinum is. You’ve got platinum cases, platinum dials, platinum crowns, platinum buckles, and even platinum stitching on the straps. Like I said, they’re and ode to the hefty precious metal as much as anything else.
The Vacheron Constanti Traditionnelle Manual-Winding Collection Excellence Platine certainly has all of these things, but what strikes me most about it is just how darn understated the entire thing is. When you first encounter the watch you get that feeling that you’re looking at something special, but you’re not quite sure why. The case measures in at 38mm across and just 7.77mm thick, making it just about the sweet spot for a classically styled dress watch, though all that platinum does make it heftier than you’d expect. The platinum dial has a soft grained finish to it and a small “Pt950” hallmark down between four and five o’clock, noting the material of which it’s made. These platinum dials have tons of character to them and get better the closer you look.

The only visible metal components that aren’t platinum are the hands and hour markers, which are polished white gold. One thing I want to be sure to call out is the faceting on the hands – in basically any lighting conditions you get a sharp contrast, with half of each hand looking dark and half of each hand looking light. It gives the watch a crispness and sense of precision that I really love. This is one of those little things that takes an already good watch and makes it exceptional.
Powering this watch is the Vacheron Constanti Traditionnelle Manual-Winding Caliber 4400 AS, a quintessentially Genevois movement. It’s about as classic and traditional as you can get. The swooping bridges are beautifully finished with bright Côtes de Genève and all of the engraving is sharp and clean. The caliber is hand-wound and carries a 65-hour power reserve. The only hint that this is a modern movement and not a design from 150 years ago is that the balance beats at 4 Hz instead of 2.5 or 3 Hz. This movement of course carries the Geneva Seal and is both a pleasure to look at and a reliable companion on the wrist. This style of movement isn’t the most fashionable these days, with many watchmakers looking for new types of calibers that show off more obviously over-the-top finishing or flashy architecture, but I think this watch is a perfect case for why more folks should be looking back for inspiration too.
I’ve always been a fan of the Collection Excellence Platine watches, but this expression of the idea is by far my favorite. In fact, I’d be hard pressed to think of a watch from SIHH 2019 that I’d more like to wear on a daily basis. The lack of complications and the straightforward design lend themselves really well to this kind of a treatment – ultimately, this watch is about as pure an expression of fine watchmaking as you can find anywhere, and the effect is heightened by the consistent use of platinum throughout. There’s nothing to distract you from appreciating all the little touches that make the watch so outstanding, from the faceting of the hands to the countersinking of the sub-seconds register to the sculpting of the caseband. While I’d likely swap out the strap for one of my own, I still like that the stitching thread is platinum. Just conceptually, I appreciate that Vacheron pushed this idea to its logical conclusion without missing a beat. That the watch is extremely comfortable on the wrist and looked great with my navy jacket and grey flannel trousers only made me want it all the more.