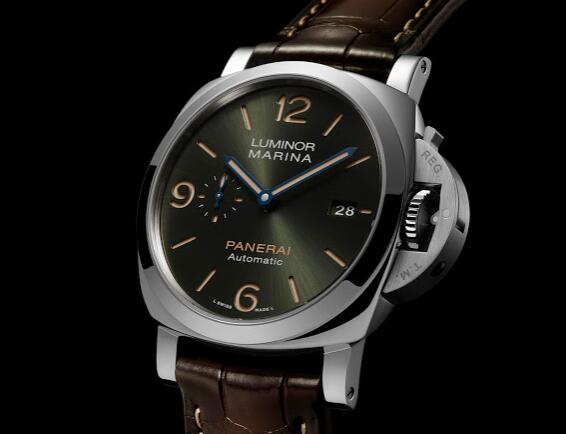 Panerai presented the Panerai Platinumtech Luminor Marina PAM01116, a special edition that will be available exclusively at Panerai boutiques globally and produced in a limited run of only 70 pieces delivered with a warranty term of 70 years.

You read it right, 70 years. During this unusually long warranty term, a celebration of the 70th anniversary of the Luminor collection, the brand will provide customers with services to keep the watch in perfect functioning free of charge. To remark the exceptional achievement, on the back of the watch there is the “70 Years Warranty” logo applied through a metallization process.

The new model also stands out for its olive green dial with satiné soleil decoration, sandwich structure, and Arabic numerals and indexes in beige Super-LumiNova with green luminescence. The Panerai logo, the small seconds at 9 o’clock and the date aperture at 3 o’clock complete the ensemble.

As suggested by its name, the Platinumtech Luminor Marina is made in a special alloy that it is harder than conventional platinum with enhanced physical properties. The precious metal was selected to give the model greater resistance, though it is considerably more difficult to work and polish. The 44 mm x 13.4 mm case is water resistant to a pressure of 5 bar (50 metres / 165 feet).

Designed and developed entirely by the Panerai Manufacture in Neuchâtel, the self-winding Caliber P.9010 beats at 28,800 vibrations per hour and offers a three-day power reserve thanks to its two barrels. The movement also features a rapid adjustment system that can move the hour hand forward or backward in increments of one hour, independent of the minute hand.

The Panerai Platinumtech Luminor Marina looks reassuringly familiar and will inevitably win the hearts of the so-called Paneristi. However, this model is also über-luxurious, made from a modified form of platinum, far removed from the brand’s functional military watches of yesteryear.

This morning, the ‘gold spot price’ in the UK is £42.48 per gram (as at 11.2.2021). One-hundred per cent pure gold is stamped ’24-carat’ and is a commodity. The widespread presumption has always been that gold is gold and certainly this was the case in the past, however, several watch brands are now modifying this precious metal.

The gold widely used in the watch industry is 18-carat or 75% pure. The composition of the remaining 25% is increasingly being altered in order to confer additional user benefits and, from a marketing perspective, provide a means of differentiating the modified material from ‘regular’ gold.

In some instances, this advanced metallurgy makes the precious metal less susceptible to scratching. For example, Richemont International SA (parent company of IWC, Vacheron Constantin, Panerai and many other brands) has registered the trademark ‘Armour Gold’, an unusual new variant of 5N gold. ‘The material is produced using a sophisticated process, during which the microstructure of the alloy is transformed.’ As a result, the material is significantly harder and more wear-resistant than conventional 5N gold.

Panerai, as stated earlier, a subsidiary of Richemont International SA, has conceived its own version of gold, ‘Goldtech’. Again, the modified material is 75% pure and is combined with 24% copper, imbuing the precious metal with a distinct red hue, as well as 0.4% platinum. The composition of Goldtech endows the metal with a ‘unique tone and an extreme degree of mechanical and oxidation resistance.’

The Swiss-Italian firm, has, once again, revisited a ‘regular’ precious metal and altered its composition for the betterment of its products. In this instance, Panerai has focussed its gaze upon the ultimate noble metal, platinum. The aptly named Platinumtech is ‘harder than conventional platinum with enhanced physical properties. The precious metal was selected to give the model greater resistance, though it is considerably more difficult to work and polish.’

In the past, Panerai supplied the Royal Italian with optical instruments as well as divers’ watches. Its roots were based in making robust, functional objects. Today, Panerai watches remain robust and functional, but also conspicuously luxurious. Indeed, in recent years, it has been prolific crafting a myriad of new watches, some encased in high-tech materials, including Goldtech and Platinumtech.

The new Replica Panerai Platinumtech Luminor Marina is housed in a 44mm case and sports an olive green dial adorned with a sunray motif. An automatic movement, the Calibre P.9010, sits at the heart of the watch. This movement, ‘designed and developed entirely by the Panerai Manufacture in Neuchâtel’ is equipped with two barrels, delivering a prodigious power-reserve of 3 days.

The sandwich dial construction, the ‘Safety Lock’ crown protection device and the Radiomir 1940 case are instantly recognisable as Panerai design elements, sating the desires of the Paneristi. However, where this model differs from the brand’s functional watches of yesteryear is that it features an exhibition caseback affording views of the beautifully appointed Calibre P.9010. A ’70 Years Warranty’ logo has been applied to the dorsal pane of sapphire crystal using a metallisation process, fanfaring the extraordinary warranty terms which accompany this timepiece.

With its craftsmanship and experimental proprietary technologies Panerai enhances the essential qualities of its materials. In the wake of the 70th anniversary of the Luminor collection, named for the luminescent substance first patented in middle of the last century and an enduring signature of the brand, Panerai once again celebrates its iconic collection with a precious interpretation: the Platinumtech Luminor Marina (PAM01116), guaranteed for 70 years *.

A special edition with a singular identity, Platinumtech Luminor Marina is available exclusively at Panerai boutiques globally and produced in a limited edition of only 70 pieces. During its exceptional warranty term of 70 years the brand will provide customers with services to keep the watch in perfect functioning free of charge. On the back of the watch there is the “70 Years Warranty” logo applied through a metallization process.

Identifiable by its case and dial layout, Platinumtech Luminor Marina stands out in the Luminor Marina collection thanks to the noble metal that endows it with toughness: Platinumtech. An alloy reformulated and perfected by the Panerai Laboratorio di Idee, it is harder than conventional platinum with enhanced physical properties. The precious metal was selected to give the model greater resistance, though it is considerably more difficult to work and polish.

The delicate finishing of the Platinumtech Luminor Marina case requires, not surprisingly, a meticulous and highly specialized manual polishing process.

Masterful aesthetics have been matched by refined, high-performance mechanics furnished by the self-winding Caliber P.9010, which has a three-day power reserve and is designed and developed entirely by the Panerai Manufacture in Neuchâtel. The movement features a rapid adjustment system that can move the hour hand forward or backward in increments of one hour, independent of the minute hand.

Water-resistant to 5 bar (approximately 50 meters deep), the Platinumtech Luminor Marina features an alligator leather strap in dark brown with ecru stitching and a brushed Platinumtech trapezoidal pin buckle. A second strap, chosen according to the customer’s request at the time of purchase is also included, along with a screwdriver for changing and removing the Platinumtech trapezoidal buckle and a black lacquered wooden box with the luminescent Luminor Marina logo on the lid.

After not having had a platinum model in the catalogue for some time, Panerai is returning to the lustrous and heavy metal with the Platinumtech Luminor Marina PAM01116. But the case of the PAM 1116 is not conventional, PT950 platinum alloy used in most wristwatches, instead it is an extra-hard alloy with better wear resistance.

And like many of Panerai’s recent top-of-the-line models, the Platinumtech Luminor boasts a 70-year warranty – which is double emphasised by an oversized emblem on the sapphire back.

Panerai ventures only rarely into platinum for its cases, and here the Florentine-heritage, Swiss-made brand does so with a modern twist. Like the Goldtech material that preceded it, Platinumtech is an alloy based on a noble metal that is then “reformulated in perfected,” according to Panerai, to enhance its physical properties, including hardness and resistance, while also making it much more difficult to finish and polish.The case, in the Luminor Marina collection’s hallmark cushion-shaped style, requires a painstaking manual process to achieve its delicate finish.