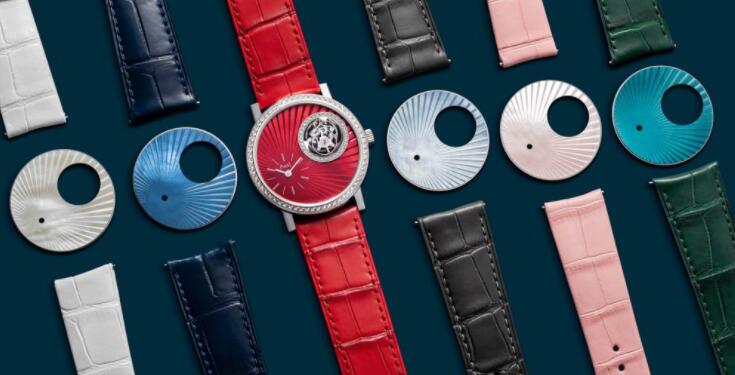 Piaget tourbillon watch Infinitely Personal is a new service offered by the esteemed Maison. Clients can visit one of the brand’s boutiques and use the Piaget Style Selector to create the Altiplano Tourbillon of their dreams. The numerous personalisation options allow prospective wearers the opportunity to suffuse their design with an array of artistic crafts, all masterfully executed by the firm’s legendary artisans.
The ultimate expression of luxury is choice. While most people select off the peg garments, bespoke is the preferred option for affluent consumers with impeccable taste. Indeed, Savile Row tailors and Parisian Haute Couture Houses have been sating the desires of the world’s most stylish individuals for generations.

In the esoteric world of haute horlogerie, Piaget needs little introduction. Founded in 1874, the company’s name is a byword for luxury. Originally, the firm operated from a workshop in La Côte-aux-Fées, a location that continues to play host to the brand. In addition, Piaget also has a modern facility in Plan-les-Ouates near Geneva. Within these workshops, the firm crafts peerless creations free of compromise.

Piaget was originally a movement specialist, however, in the 1940s the firm began making its own watches. In the 1950s, Piaget unveiled its now iconic Calibre 9P which, at the time, was the world’s thinnest movement. Over the years, the brand has released additional ultra-thin movements and is a leading exponent of this horological genre.
As well as producing ultra-thin watches, the Swiss marque is known for making timepieces endowed with high complications such as a minute repeater or tourbillon. It is also known for its mastery of various artistic crafts, including gem-setting and enamelling.

Now, the esteemed Maison has unveiled its new customisation service, Piaget Infinitely Personal. Clients are able to visit a Piaget boutique and, using the Piaget Style Selector, personalise their ultra-thin flying tourbillon. Cases are available in two sizes, 38mm and 41mm in a choice of white or rose gold. Dials are offered in a myriad of shades, available in a choice of hand guilloché, Grand Feu enamel or diamond snow-paved. Brilliant-cut or baguette-cut diamonds can be specified for the case. Likewise, the tourbillon ring framing the dial-side aperture can be personalised in several ways.

Now, with the advent of Piaget Infinitely Personal, there is no need to settle for an off-peg timepiece.
Whether it is a bezel adorned with the finest baguette-cut diamonds or an exquisite enamel dial, the new Piaget Altiplano Infinitely Personal concept gives clients the possibility to create a personalised Altiplano Tourbillon.
Piaget was founded in 1874 by Georges Edouard Piaget who started making watch components in his workshop on the family farm in the village of La Côte-aux-Fées. He sold high-precision parts and movements to some of the leading international watch companies across the Swiss Jura. Already at this time, the components he was manufacturing were ultra-thin.

By 1943, the company was being run by his grandsons, Gérald and Valentin Piaget, who together took the company into a new era by registering the Piaget name and starting the production of the company’s own creations.
Ultra-thin movements and timepieces have always been at the heart of Piaget’s culture and history. In the 1950s, Piaget set itself the challenge of creating a revolutionary new watch movement of unheralded thinness. The result, unveiled in Geneva in 1957, was the 9P. At only 2mm thick, this calibre was universally hailed for the elegance of its profile, its performance, and its outstanding reliability. The 9P was one of the world’s thinnest mechanical movements.
In 1960 Piaget unveiled the 12P, the thinnest automatic movement in the world, becoming the first of many world records for the Maison. Since the 1960s, ultra-thin watches have become one of Piaget’s horological specialities.

An ultra-thin movement is not a complication per se, but the art of creating components two to three times thinner than regular parts is something incredibly complex. To date, Piaget presented more than 50 in-house calibres, of which 35 are ultra-thin.
In 2017, Piaget celebrated the 60th anniversary of its ultra-thin movement with the ultra-thin Altiplano Flying Tourbillon, putting the movement at the service of the design. This manufacture, manual-winding movement featured the time at eight o’clock and the tourbillon at two o’clock. With 157 ultra-thin and ultra-light components, such as a carriage measuring a mere 2.88mm, three titanium bridges weighing no more than 0.2g, and some components measuring no more than the thickness of a human hair, the Piaget Altiplano Tourbillon is a feat of engineering. It also holds a patent for its stem mechanism, featuring an intermediate wheel that looks like a staircase and enables the user to set the time of the off-centred dial — another first in the watch industry.
Personalisation is nothing new for Piaget. In the 1960s, the Maison’s American subsidiary designed the Piaget “Style Selector”. This useful tool was created to help better serve Piaget high-society who all wanted to get their hands on one of the brand’s ultra-thin timepieces. They could choose the components of each model, from the shape of the case, to the bezel, jewellery settings, straps, dials and more. It was such a success that it was rolled out to boutiques worldwide. The Piaget “Style Selector” now provides the inspiration for a brand-new personalisation programme: The Piaget Infinitely Personal concept.

Piaget Altiplano Tourbillon is recognized for its elegant design that includes baton hands and indexes, and beautifully-shaped lugs. Personalisation of this model allows each new owner numerous options to co-create an exceptional piece of art by choosing the case size (38mm or 41mm), type of case, dial, tourbillon ring, strap and buckle.
The 38mm model comes in a choice of a diamond set white or rose gold bezel. There is a wide selection of dials, including sunburst mother-of-pearl dials in blue, pink, red, or white, hand guilloché radiating gold dials covered with translucent blue, green, teal or red Grand Feu enamel or diamond snow-paved dial. There is also the option for a sunburst lacquer dial which can be matched to any colour. Piaget can even match the dial’s shade from a photograph of a personal memory, for a truly unique personalisation.

The 41mm model offers additional cases with options in white or rose gold that can be set with brilliant-cut or baguette-cut diamonds. Piaget is also offering the possibility to adorn the Altiplano Tourbillon with baguette-cut emeralds, sapphires or rubies for additional colour and sparkle. For the dial, the possibilities include a hand-engraved guilloché enamel grand feu decoration, a diamond snow-paved dial, or a sunburst lacquer dial that can be customized with any colour.
The tourbillon ring of the 38mm and 41mm models come in white or rose gold, set with diamonds or engraved with a personal message. The case back can also be engraved. To complement the Piaget Altiplano Tourbillon Infinitely Personal, there is also a selection of over 25 different alligator straps.

With the Altiplano Tourbillon Infinitely Personal, Piaget continues the customisation service that has been a hallmark of the brand for more than 50 years, and allows its clients to become part of the creation of their unique watch. The only limit is their imagination.

Shown here are three examples of customized Altiplano Tourbillon models using the Altiplano Tourbillon Infinitely Personal tool.
The first edition is a 38mm white gold case with a stunning array of snow-set dial and brilliant-cut diamonds totalling 3.26 carats. It is paired with a red alligator strap.

This 38mm white gold case is adorned with brilliant-cut diamonds on the bezel and around the tourbillon’s aperture (1.26 carats). This particular timepiece comes with an exclusive guilloché dial in red mother-of-pearl that is complemented with white gold coloured hands and indexes. It is paired with a red alligator strap.

Last but not least, a 41mm white gold case and hand-guilloché gold dial with a sun-ray motif covered with translucent green enamel. The bezel is framed by baguette-cut diamonds (5.07 carats) and paired with a matching green alligator strap.