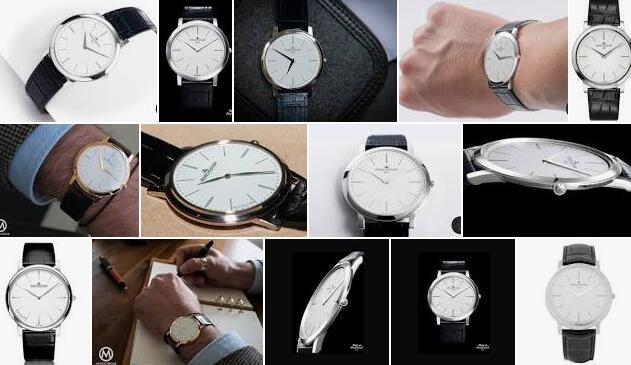 Jaeger-LeCoultre
180 years dedicated to the quest for excellence
Since 1833, creation by Jaeger-LeCoultre have been laying milestones in the history of Fine Watchmaking. Born in the Vallée de Joux, these unique creations encapsulate the expertise of the men and women of the Manufacture, guided by the enduring quest for excellence, perpetual inventiveness, a willingness to question its fundamentals and a desire to rise to the wildest challenges. Each of the 400 patents and the 1,242 calibres bearing the Jaeger-LeCoultre signature are a reminder of their passion for quality and innovation. The Jubilée “Hommage à  Antoine LeCoultre” collection is inspired by 180 years of enthusiasm, obstinacy and precision. In a word, the creative force of Antoine LeCoultre.
Jaeger-Lecoultre Master Ultra Thin Jubilee
The pioneering spirit of Jaeger-LeCoultre
Over 180 years ago, Antoine LeCoultre imagined one of the finest watchmaking adventures  ever. In tribute to its founding father, the Manufacture dedicates a collection of three watches  to him including the Master Ultra Thin Jubilee, the world’s thinnest mechanical manually-wound  watch. At 4.05 mm thick, it sets a new record for horological slenderness. Its perfect circle is  matched by a pure design inspired by an ultra-thin 1907 pocket-watch. Through this new  accomplishment, the founder’s creative approach to his profession is more vibrantly alive than  ever.
Setting a record as the world’s thinnest manually-wound mechanical movement, the ultra-thin pocket-watch created in 1907 heralded a new chapter in the history of the Grande Maison. In  2013, in tribute to 180 years of watchmaking tradition, Jaeger-LeCoultre presents a new ultra-thin wristwatch. With a new case measuring just 4.05 mm thick and a movement reflecting the full horological expertise of Jaeger-LeCoultre, this creation has found its place within the legacy of exceptional watches produced by the Manufacture.
Gaining a full understanding of this model means going back to 1907 and its descent from the world’s thinnest mechanical manually-wound pocket-watch by Jaeger-LeCoultre. Calibre 145, a movement still on display in the Heritage Gallery of the Manufacture, made an indelible imprint on watchmaking history. Ultra-thin watches are not only an integral part of the most ancient heritage of the Manufacture, but are in fact at the very origin of the joining of the two names Jaeger and LeCoultre. It was this encounter that gave rise in 1907 to LeCoultre Calibre 145 – a  17-lignes Lépine pocket-watch movement which, at 1.38 mm thick, was the thinnest in the world – and remains so today in its own category. It was to generate one of the most prestigious collections of ultra-thin calibres from the Manufacture Jaeger-LeCoultre.
It is in this same spirit of boldness, excellence and perfection that the Master Ultra Thin Jubilee is now being introduced. Its refined design epitomises the absolute triumph of excellence.
Its “knife-shaped” ultra-thin case in extra-white platinum measuring 39 mm in diameter is the ultimate expression of a timeless minimalist philosophy. The hour-markers, the traditional minute circle and the grained silver-toned finish of its dial are inspired by the aesthetic of the historical pocket-watches by Jaeger-LeCoultre, while radiating an admirable sense of elegance and clarity. At its heart beats mechanical manually-wound Calibre 849 measuring a mere 1.85  mm thick and which reflects the horological expertise of the Grande Maison in the field of extreme slenderness.
All its components have been designed so as to keep the overall thickness of the watch to an absolute minimum. Admirably surpassing the function of signalling the passing of time and instead becoming a showcase for this major horological accomplishment, the movement is produced and assembled in the complications workshop of the Manufacture Jaeger-LeCoultre.
In a nod to the 180th anniversary of the Manufacture, the date 1833 placed beneath the logo will be the hallmark of the 880-piece limited series.
A vibrant tribute to Antoine LeCoultre, the Jaeger-Lecoultre Master Ultra Thin Jubilee is the visible result of intangible principles combining respect for time-honoured know-how with an indomitable innovative force enabling Jaeger-LeCoultre to remain a major player in watchmaking history for the past 180 years.