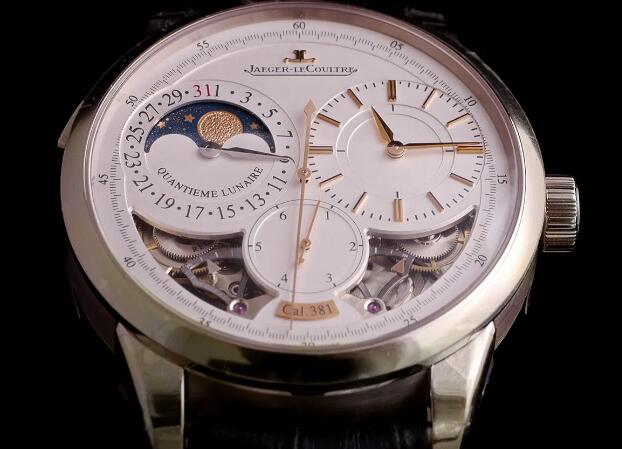 Jaeger-LeCoultre Duomètre à Quantième Lunaire in White Gold
Jaeger-LeCoultre is known for many things – watchmaking prowess is one of these things. Dubbed the “Grande Maison of the Vallée de Joux” and the “watchmaker’s watchmaker”, Jaeger-LeCoultre has shown time and time again through its watches that it is an industry leader when it comes to innovation. Of the current lines of watches that the brand offers, the Duomètre is one of the brand’s savviest offerings. Believe it or not, the Duomètre collection turns 13 this year, having made its first appearance in the form of the Duomètre à Chronographe back in 2007. The seminal Duomètre à Quantième Lunaire came along in 2010 and with it, numerous variations throughout the decade. In 2016, a white gold version with a uniquely textured moon phase disc was introduced, and it has since remained one of our favourite iterations of the watch. In the spirit of ‘better late than never’, we bring you the low-down on the Duomètre à Quantième Lunaire and our thoughts on the charming white gold variant.The Case, Dial, and Hands
The case of the Duomètre à Quantième Lunaire in white gold measures 40.5 mm in diameter and 13.5 mm in thickness. As a watch designed to be contemporary, the case dimensions are on point – neither too large nor too demure. The case design is fairly simple, with everything polished except for the case flanks, which are satin finished. This particular style of case finishing is favoured due to the visual contrast that it offers. At the 10 o’clock position on the case is a pusher that allows for the date to be quick-set; actuating it is a tactile experience that watch geeks will definitely look forward to.The Duomètre à Quantième Lunaire has a substantial case but it given its movement complexity, it should come to no surprise.
Where the fun truly begins is on the dial. The main dial is silver-grey and opaline in quality, with two cut-outs on the bottom left and right quadrants. These cut-outs reveal the movement, including two power reserve indicators. There are three sub-dials to be found on the partially openworked dial. The one closest to the 3 o’clock position displays the hours and the minutes. While the hour track is applied, the minute track is printed in black. To the left, is another sub-dial of equal size – this one displays the moon phase and the date. The date is displayed radially, with odd dates printed in numbers and even dates printed as dots. Inboard of the date track is the bosom-style moon phase display. There have been differing executions of the moon phase display on the Duomètre à Quantième Lunaire over the years, but this one, where the moon is hand-hammered, is our favourite. It is far more textured, realistic, and appealing than the supposedly ‘photorealistic’ version from the original Quantième Lunaire, at least in our opinion. Last but not least, beneath the two larger sub-dials lies a smaller one that displays fractions of a second; this complication is known as the foudroyante or lightning seconds. While it isn’t as practical as the date nor as picturesque as the moon phase, the foudroyante never fails to hypnotise and mesmerise all who gaze upon it. Indeed, we caught ourselves staring like a moth to a flame.There have been many executions of the Duomètre à Quantième Lunaire moon phase disc. This one is the most textural so far.
Another attraction on the Duomètre à Quantième Lunaire is its incredibly long and thin central seconds hand. It serves as the perfect foil to the whizzing foudroyante, with its slow but graceful sweeping action across the dial. It also gives the Quantième Lunaire the feel of a scientific tool, especially with the inclusion of the extra-precise seconds track. The remaining hands are rendered alpha-style – two for the hours and minutes, and one for the date. In order to prevent operator confusion, all hands related to time-telling functions are crafted in pink gold while the one date hand is made of white gold.