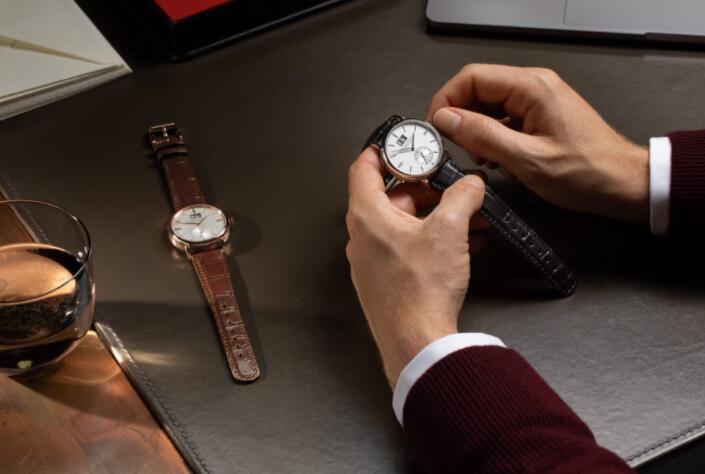 Outsize date. The outsize date is made possible through two separate display surfaces: a units disc with numbers 0 to 9 and an intersecting tens disc with numbers 1 to 3. The Lange outsize date draws its inspiration from the famous Five-Minute Clock in the Dresden Semper Opera House, which was engineered by the Dresden Court Clockmaker Johann Christian Friedrich Gutkaes.Since the re-establishment of the A. Lange & Söhne manufactory and presentation of its first new collection in 1994, there has been one complication that persistently characterises the design of many of our timepieces: the patented A. Lange & Söhne outsize date, which enables a date display with digits around three times as large as those in watches of comparable dimensions. The A. Lange & Söhne Saxonia Outsize Date is now available with an argenté-coloured dial and offered in a choice of two case materials, white gold or pink gold. These latest models sit alongside the existing versions endowed with black dials. Named after the state of Saxony, these watches pay respect to the German state which is now the epicentre of the nation’s watchmaking industry.In 1948, shortly after World War II, Lange’s German Manufactory ceased operations. Up to this point, it had been trading continuously since 1845 after Ferdinand Adolph Lange set up his business in Glashütte, a former mining town in Saxony and recruited 15 apprentices.

After the fall of the Berlin Wall, Walter Lange grasped the opportunity to revive the family firm, first started by his great grandfather. As a result, the company returned to the watchmaking scene in 1990 after a 40-year hiatus. Today, A. Lange & Söhne is known to watch aficionados around the world and has become a byword for understated elegance, mechanical excellence and peerless finishing.After the Manufactory reopened, the German marque released four models (1994), including the Saxonia, the Tourbillon ‘Pour le Mérite’, the Arkade and the Lange 1. The latter watch has since become the face of the brand, courtesy of its off-centre hour and minute display, small seconds and ‘large outsize date’.

The ‘large outsize date’ was inspired by the Five-Minute Clock in Dresden’s Semperoper, the Saxon state opera. The date is imparted using two discs, via two apertures. Both discs are seemingly at the same height, but there is actually a minuscule gap between the two as the ‘units’ disc passes beneath the ‘tens’ disc.