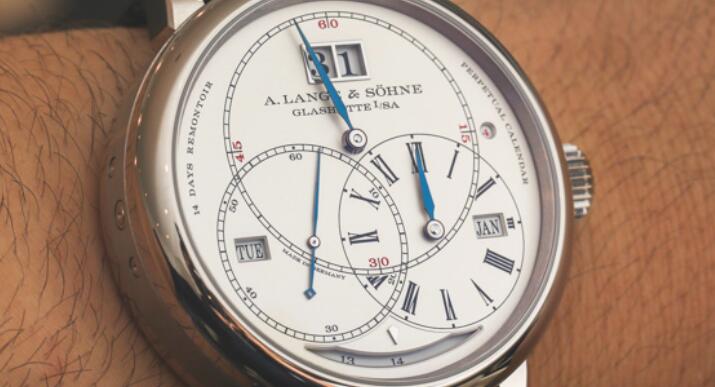 SIHH 2013 is in full swing and A. Lange & Sohne is not pulling any punches. ALS has announced the new 1815 Rattrapante Perpetual Calendar, and it looks to be a complete knockout. Featuring a new Lange calibre, the L.101.1, the 1815 Rattrapante Perpetual Calendar combines some of the most sought after complications into one dazzling package that has been designed as a tribute to early A. Lange & Sohne pocket watches.The L.101.1 movement, which consists of 636 separate parts, incorporates a rattrapante or split-seconds chronograph, a perpetual calendar, moon phase indicator and power reserve display. The L.101.1 is ALS’s eighth in-house chronograph movement and sports dual column wheels, 43 jewels and a power reserve of 42 hours. As is the case with perpetual calendars, this ALS will accurately measure the date to 2100, at which point a one-day correction will need to be applied. Thanks to the unique way in which the Gregorian calendar is balanced, every 400 years we omit a total of three leap days. Years that end in “00” but are not a clean multiple of 400, do not have a leap day. The year 2100 does not have a February 29th, so anyone lucky enough to have an ALS like this one in their possession will need to correct the date. This is likely only going to be a problem for the youngest of ALS collectors (looking 87 years down the road) or for the fortunate few who will be willed such a mechanical marvel.Employing a quad sub dial layout, the dial design is crowded but elegant. The twelve o’clock dial tracks the chronograph minutes while a subtle silver (or gold) hand indicates the remaining power reserve. The sub dials at nine and three display the perpetual calendar information while the six o’clock dial houses the running seconds above a traditional moon phase display that is accurate to a single day every 122 years (definitely a problem for a future generation of owners).Available in platinum (ref 421.025) or pink gold (ref 421.032), the A. Lange and Sohne 1815 Rattrapante Perpetual Calendar is 41.9 mm wide and 14.7 mm thick and comes mounted to a crocodile leather strap. Few things weaken the knees of serious high-end collectors like platinum cased perpetual calendars, so ALS has delivered in a big way with both this new model and the beautiful calibre L.101.1 functioning within. A. Lange and Sohne is considered to be one of the finest (sometimes THE finest) watch manufacture in the world and this new 1815 Rattrapante Perpetual Calendar serves as witness to the level of expertise, attention to detail, and outright craftsmanship that is required to operate at the top of the watchmaking game.It’s no secret that A. Lange & Söhne makes a good watch. Heck, you could even go so far as to say they make a magnificent watch, and I don’t think anyone would argue with you. However, a byproduct of being among the highest echelons of watchmakers is that the focus tends to get put exclusively on their most exceptional pieces. But this year, my personal Lange highlight is not the grandest complication – it’s the 1815 Annual Calendar. After SIHH 2017, this watch was something of a sleeper hit. While watches like the Jaeger-LeCoultre Master Control, the Panthère de Cartier, the Vacheron Constantin Celestia, and even the Zeitwerk Decimal Strike from Lange were all getting lots of love, the 1815 Annual Calendar sort of slipped through the cracks. I listed it as my favorite grail watch at the time, but knew I needed to spend more time with it. Now, after spending a full week with the watch firmly on my wrist, I can say without question my instincts were right: this is one amazing watch. But, it’s not without its flaws, and there’s even a little bit of controversy about the 1815 Annual Calendar among Lange purists. “When was the first annual calendar introduced?” My colleague Ben Clymer once asked this question of our then-20-year-old intern, who fancied himself a pretty serious watch guy. This was, at one point, something of mild-mannered hazing from Ben to novice watch fans. Our intern’s response? “I’d guess mid 1800s sometime?”And from this misplaced confidence came Twelve Mistakes New Watch Guys Make, because, as you should know by now, the annual calendar is a product of the 1990s. It can barely drink!

Indeed, the annual calendar was created just 21 years ago by Patek Phillippe, and first produced as the reference 5035. The concept, which was really one of the first “mid-tier” complications to come from a major brand, was a brilliant commercial step for Patek, if a bit ho-hum in terms of horological innovation. Instead of a simple calendar where one must manually adjust the date at the end of each month, the annual calendar compensates for those months with 30 days. That would be an incredible accomplishment! That is, of course, had the perpetual calendar, which compensates for not only shorter months but also for all leap years, had not been widely used in horology for the better part of two centuries.