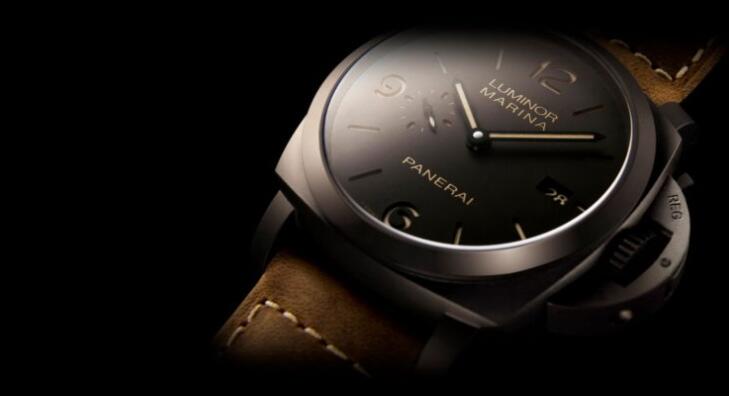 Panerai Luminor Composite 3 Days PAM 386 in CeramicNovember 18, 2010 by Evgueni MatoussevitchFiled Under: Swiss Brands
Ahead of the SIHH 2011 industry event, Panerai has announced its Luminor Composite PAM 386 model in a scratch-resistant ceramic case. Measuring just 44 millimeters in width, the new member of the Luminor family is more, um, wearable than the last year’s ceramic piece, while still retaining its heavy masculine presence and offering clean, easily recognizable design of its dial.While the original Radiomir Composite Marina Militare 8 Giorni P2002 47mm (PAM339) that was introduced exactly a year ago at SIHH 2010 was powered by a manufacture-made Panerai P.2002/7 Calibre hand-wound movement, the new model comes equipped with an automatic P.9000 caliber, which is also made solely in-house but looks like a sort of stripped-down job compared to the hand-wound version.
You see, the automatic winding module comes at the price of not only making the mechanism more complex but also by making it thicker. Sometimes the latter problem is mitigated by using a more advanced winding system (thus making the movement even more complex,) but in this instance, while designing this otherwise absolutely beautiful cal. P.9000, Panerai had to remove (I think, it would be better to say “not to use, to begin with”) some components to make it better fit their cases.
While the Caliber P.2002/7 sports three mainspring barrels providing for a total power reserve of eight days, the P.9000 is featuring twin-barrel design and is running for a mere 72 hours.

Well, that’s still enough if you plan to wear the PAM 386 on office days, replacing it for weekends with the gorgeous Luminor 1950 Equation of Time Tourbillon Titanio (PAM365) while cruising the Mediterranean Sea on your 100-feet motorboat. Also, it beats the standard power reserve of approx. 42 hours of a similarly outfitted three-hander that is animated by a run-off-the-mill ETA or Sellita movement.
Most watchmakers of Swiss origin tend to decorate their movements with perlage (aka circular graining,) engine turning or, at least, Geneva stripes. Not so with Panerai. This military-styled watch adorns its engine with nothing more than solemn brushed steel with a minimalistic corporate logo on the skeletonized oscillating weight. Of course, the finish is still impressively refined: you won’t mistake it for some cheap-o throw-away job that often comes with inexpensive timekeepers.

Although both movements are of the same diameter of 31 mm (13.75 lignes,) the new Luminor is offered in a significantly smaller case of 44 mm, which makes it more of a wearable accessory, rather than a collector’s item. The case, however, seems to be a bit thicker due to the P.9000’s impressive thickness of almost eight millimeters top to bottom. However, for such a deliberately oversized timekeeper some extra thickness doesn’t seem to be a problem: the PAM 386 is supposed to be massive.
f you compare the two models, you will notice that both sport almost the same styling, however, the Panerai Luminor Composite PAM 386 comes in a signature Luminor case with the patented winding crown guard and sports a small date window at 3 o’clock, where the PAM 339 had the famous “Otto Giorni Brevettato” (“Eight Days Power Reserve”) logo.

The rest, including the case and the trademark sandwich-type dial, are identical.
We can assure that every Panerai Luminor Marina 1950 3 Days Automatic Composite PAM00386 Replica advertised on replicawatchreport.co is 100% Authentic and Original. As a proof, every replica watches will arrive with its original serial number intact.