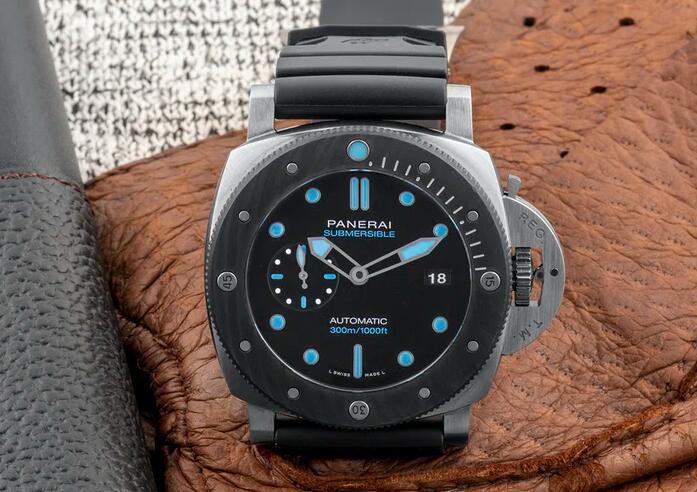 For as long as I’ve covered the watch beat, there have been companies putting forward timepieces made from new materials. It’s easy to look askance at some of the watches that fall into this “new materials” category. After a while, you start to wonder whether material A, B, or C is a gimmick borrowed from synergistic industry X, Y, or Z; whether said material will have any staying power in the watch landscape; and whether it will live up to the lofty claims that are made about it. For several years now, in a pretty low-key way, Panerai Submersible 47mm replica has been pushing the category of materials science in its watches, utilizing new substances with the potential to make its timepieces more robust and lighter, a not insignificant mission for a company steeped in making oversized tool watches that often reach 47mm. I think the work that Panerai has recently done in this area is commendable. The watch that we have the pleasure of going hands on with today features two relatively new materials in the company’s arsenal: BMG-Tech for the case and Carbotech for the bezel.
BMG-Tech, which is short for bulk metallic glass, is a substance formulated to have the look and the feel of a more conventional watchmaking material such as stainless steel, while delivering enhanced performance in the form of lighter weight and superior resistance to scratches. You look at it, and you assume that its case is made of your run-of-the-mill steel or titanium with a carbon bezel flourish, and I think that this is kind of the idea. Using BMG-Tech allows Panerai to make watches that look like normal watches. A conventional Submersible is, after all, a design that not only has its fans, but can be noticed from across a room.
So what exactly is Bulk Metallic Glass? To put it very simply, it’s a glass-like alloy that incorporates metals. More specifically, it’s an alloy with a disordered atomic structure achieved via a high-pressure, high-temperature injection process. This is followed by a rapid cooling period – mere seconds – during which the material “freezes” before it can organize into a crystalline structure. It’s the disordered structure of bulk metallic glass that gives the material its signature qualities of robustness, extreme corrosion resistance, the ability to withstand substantial shocks, and resistance to magnetic fields. As for what it’s actually made of, the constituent elements in the alloy include zirconium, copper, aluminum, titanium and nickel.
The bezel is made of a different proprietary material that Panerai calls Carbotech. A composite material based on carbon fiber, Carbotech has an uneven matte black look and texture that can vary a bit based on how it is cut, making each bezel, case, or other component subtly different looking. Individual Carbotech components – in this case the bezel, though Panerai has also made cases of Carbotech – are formed by making plates from thin sheets of carbon fibers, which are compressed with a polymer known as PEEK (Polyether Ether Ketone).

On the wrist, I think the case made of BMG-Tech wears closest to steel, though slightly lighter, both in terms of the mass I felt sitting on my wrist and the heat transfer between my wrist and the metal as I wore it. There’s no getting around it: It’s large watch for my taste, at 47mm. But with the exception of a handful of recently introduced models in the Luminor Due line, one doesn’t traditionally run to Panerai for small or ultra-thin watches. A 47mm watch like this one is probably the purest expression of Panerai’s history as a maker of tools for divers in need of extreme water resistance and legibility in deep water. This watch provides that with its 300 meters of water resistance and its large lume plots and luminous hands. The luminous pip in the bezel glows a bright green, as do the hour markers and hour hand. The minute hand is easy to distinguish both by its size and by its blue glow.
The movement inside the Panerai Submersible BMG-Tech – 47mm is the company’s in-house P.9010, an automatic offering time and date with 72 hours of power reserve. It beats at a conventional 28,800 vibrations per hour (4 Hz) and has a hacking seconds, while providing a slimmer profile than its predecessor, the P.9000. The hour hand, which is connected to the date, can be set in one-hour increments, which makes it a pretty practical travel watch even though it doesn’t offer a GMT or second time zone.

At $15,300, the Panerai Submersible BMG-Tech 47mm (PAM00799) is far from cheap, but Panerai gives customers quite a bit in exchange for their money. The P.9010 is a very nice modern movement, and the bulk metallic glass case would seem to be a great solution for those who want a case that is resistant to scratches, while retaining the look of a conventional steel sports watch.
It bears mentioning that the actual timepiece shown here was tested by climber, adventurer, photographer, and filmmaker Jimmy Chin, who recently signed on as a Panerai ambassador. The company handed this example off to Chin and encouraged him to go ahead and climb with it. Upon learning about this, I was immediately intrigued. Chin told us in the HODINKEE Magazine Volume 3 that he tends not to wear a watch on his wrist when climbing, as watches tend to get very badly damaged during this activity. He did wear this Submersible BMG-Tech on his wrist while climbing, however, and it still looks to be in great shape.
I saw Chin when he was in New York for an event this past November, and I asked him about the experience of climbing with a high-end mechanical watch. While he affirmed that there are indeed certain types of climbing, like pure crack climbing in the desert, where you can’t really have a watch on your wrist, he told me about taking this new Submersible to the mountains. “Everything gets kind of beat up out in the mountains, so it’s nice to go in there knowing that you have a watch that’s basically built to sustain that kind of abuse. Previously, I’d be really worried about wearing a nice watch up there. Everything I bring into the mountains is an essential piece. It has to serve a specific function.”
Carbon fibre – in all its composite guises – has become the material of the moment and has been used across the board, from Bvlgari’s chiming marvel to faux carbon dials on TAG Heuer’s Aquaracer… Whether or not an Haute Horlogerie model like the Octo Finissimo Minute Repeater Carbon looks good in its high-tech black suit is debatable, but one thing is certain, carbon cases work especially well for a brand like Panerai. A top military secret until 1993, Officine Panerai crafted high-tech instruments for the Italian Navy’s its covert underwater operations before it surfaced and worked its magic on dry land. Panerai was the first brand to use Carbotech – a composite material based on carbon fibre – and unveiled its 47mm Luminor Submersible 1950 ref. PAM00616 model in a striking, black mottled case. Although this was back in 2015, we recently had the watch in our hands and thought a reappraisal was in order.
From the brand that claims to be a “laboratory of ideas” (or in a more latin way: Laboratorio di Idee), it is not surprising that Panerai enjoys tinkering with high-tech materials from other industries. After all, since 1900 Officine Panerai consolidated its reputation producing high-tech, water-resistant depth gauges, sights, torpedo launchers, torches, wrist compasses, and eventually watches for the Italian Navy and patented its powerful luminous pastes (Radiomir and Luminor) to give these tools their cutting edge. Given its highly technical, top-secret nature, Officine Panerai was a natural leader in the materials science department.
Once the brand surfaced in the civilian sphere in the early 1990s, the formula of functional military performance coupled with pure Italian design won over legions of admirers and spawned a fan base of Paneristi. With an empire sustained on two pillars – Luminor and Radiomir – the brand uses the latest materials on the scene to refresh its collections. The Panerai Luminor Submersible 1950 has already appeared in ceramic, titanium, bronze, and even a Bulk Metallic Glass (BMG) case. However, the true showcase for Panerai’s plunge into cutting-edge technical materials is the LAB-ID PAM00700 with a carbon case and a lube-free movement thanks to the latest generation, low friction composites inside.