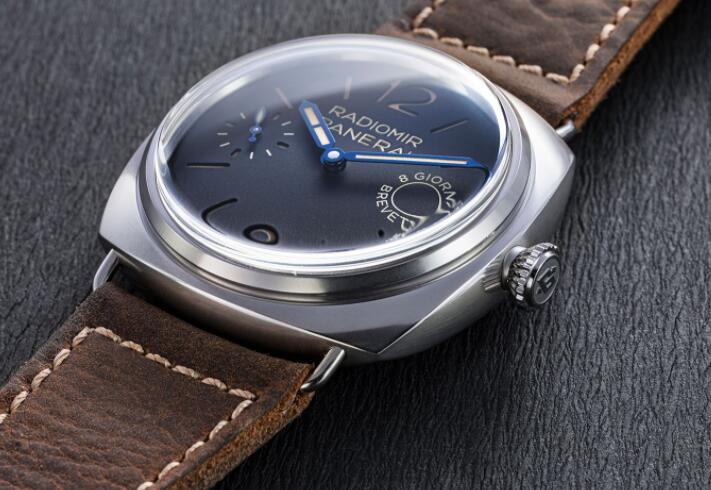 Panerai replica watch has gently eased itself towards a focus on more civilian sports watches, as opposed to retro-navy diver instrument remakes, since chief executive Jean-Marc Pontroué took the helm in 2018. So its most recent releases this year include the extra-thin Luminor Due in titanium, along with commemorative editions for the America’s Cup yacht race.

But Panerai is still keeping one eye on its Marina Militare heritage, exemplified by the pair of Radiomir watches unveiled last month, the most interesting of which is the Panerai Radiomir 8 Days 45mm (PAM00992). It has a vintage-esque style – not really a one for one remake – combined with an in-house, eight-day movement and a relatively accessible price of US$250. Most unusually, the steel case has a faux aged finish that Panerai is trying for the first time.
The new Radiomir is not a remake of a vintage Panerai, but rather it’s a mix-and-match of various elements, including the engraved logo and “8 Giorni” emblem at three. Traditionalists might find it impure, but that was essentially the founding formula for the modern Panerai company.

The result is a good-looking watch that approximates the look of a vintage Panerai while offering modern conveniences like a long power reserve.

Even though it’s a large watch – the case is 45mm – it’s smallish by Panerai standards, since the military-style Panerai replica watches are usually 47mm. But it is big enough to look like a Panerai, and it wears well for a 45mm watch, since the wire-style lugs are short, though it is slightly top heavy, as large watches with short lugs tend to be.
As is often the case for a Panerai, the form of the watch is simple – essentially a big cushion with a black dial – but the dial has a couple of interesting details.

To start with the dial has a “sandwich” construction, made up of a lower plate painted with Super-Luminova markings and an upper plate with corresponding cut-outs.

Vintage Panerai dials were constructed in the same way out of necessity; today the sandwich dial a bit of an affectation, but welcome nonetheless. Similarly, the use of parchment-coloured Super-Luminova is yet another affectation, but it works with the design.
The markings at the four quarters of the seconds are “sandwich”, while the five-minute hashmarks in between are printed
Another vintage-inspired detail is the logo at 12 o’clock, which is engraved and then filled with off-white lacquer

The coolest detail of all – but arguably the most out of place since it wasn’t found on any vintage originals remotely resembling this watch- is the emblem at three o’clock. Translating as “8 Days Patented”, the logo boosts the retro feel of the watch, while also giving the dial a bit of symmetry.
And vintage vibes are completed by the highly domed sapphire crystal that mimics the PlexiGlas found on vintage Panerai. Importantly, the sapphire crystal passes the test: it is sufficiently domed that is slightly distorts the edge of the dial when viewed from an angle.
The case is steel, but finished in an unusual manner. At a distance it is matte but also vaguely glossy, depending on how you look at it.

Panerai refers to this as a “patina” treatment, and while initially peculiar looking, it actually works well with the retro-military styling of the watch. The treatment removes the shiny, brand-new look of a, well, brand-new watch, without leaving it looking aggressively old, as some other surface finishes tend to, like an aged gunmetal coating for instance.

The process of creating the “patina” surface is a three-step process. According to Panerai, the case finish starts out just like any ordinary Radiomir case, entirely mirror polished on all surfaces. But while the finishing stops there for an ordinary case, here it continues with a quick sandblasting with “micro granules”.
The beads used for the blasting process are finer than average, resulting in a surface with the individual divots more widely spaced – almost like a fine sandpaper was gently run over the case – instead of the more common, densely granular surface applied to watch cases.

After that, the case is then polished once again, which removes some of the granularity of the sandblasted surface, further accentuating its smoothness and creating a “semi-matt” finish.
As with all Panerai in-house movements, the P.5000 is cleanly designed and plainly finished. While the front of the watch is made up of cleverly assembled retro elements, the back doesn’t hide the fact that it’s modern and industrial.

All of the decoration is simple and done by machine, while the construction is streamlined. As a result, the look is mechanical and fuss-free, but appropriate for the style and price of the watch.
Importantly, the movement is built for good timekeeping, especially this specific version. It is a second generation P.5000, which has one primary improvement over the earlier version – the addition of a free-sprung, adjustable mass balance wheel.

The other obvious changes appear to be geared towards easier production and finishing; one example is the smaller and simpler aperture that reveals the third wheel of the gear train. As a result, this version of the P.5000 is especially plain, because almost everything is covered by a full bridge that leaves only the small balance wheel and the third wheel exposed.
Despite being a mish-mash of vintage elements, the PAM992 ticks all the right boxes in terms of looks; it conveys the style of a vintage Panerai without actually being a remake. And it’s the right size, being large enough to look the part, but not too large as to be impractical.

The only downside is the robustly industrial movement that stands in stark contrast to the front, having zero vintage feel.

But given the relatively accessible price of US$260, the PAM 992 is probably the most compelling proposition in the large Panerai catalogue. https://www.tourbillon4uwatch.com