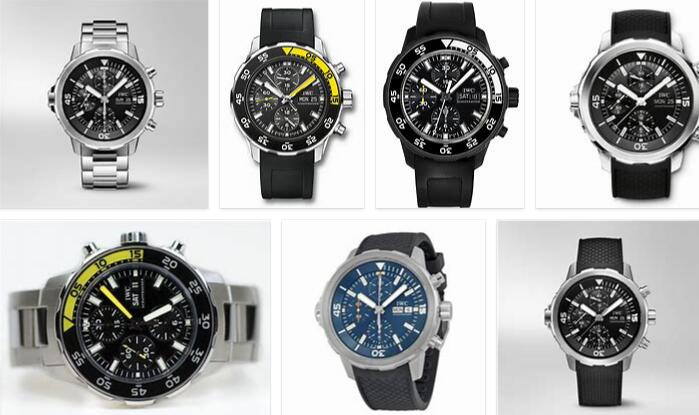 A chronograph is a specific type of watch that is used as a stopwatch combined with a display watch. A basic chronograph has an independent sweep second hand and a minute sub-dial; it can be started, stopped, and returned to zero by successive pressure on the stem. More complex chronographs use additional complications and can have multiple sub-dials to measure seconds, minutes, hours and even tenths of a second. In addition, many modern chronographs use moveable bezels as tachymeters for rapid calculations of speed or distance. Louis Moinet invented the chronograph in 1816 for use in tracking astronomical objects. Chronographs were also used heavily in artillery fire in the mid to late 1800s. More modern uses of chronographs involve aircraft piloting, auto racing, diving and submarine maneuvering.
The IWC Aquatimer Chronograph combines a stopwatch with the robustness of a diving watch to create the ideal tool watch. Recent models with the reference number IW3768 have 44-mm stainless steel cases that are 17 mm thick and water resistant to 300 m (30 bar, 984 ft).
Today, increasing numbers of shark species are facing extinction. More than 100 million sharks are caught every year whilst continued over shing depletes their nutritional resources. To help awareness about this issue, IWC is about to launch a specific limited edition of its Aquatimer Chronograph, the Edition “Sharks”, with specific dial and engraving. Overview.
The iwc Aquatimer Chronograph has been part of the IWC Schaffhausen catalog of diving watches since the early 2000s. Like the three-hand Aquatimer model, the chronograph version uses a distinctive inner rotatable bezel for monitoring dive times. It has also featured the so-called “SaveDive system” since 2014, which includes an inner ring operated by an outer rotatable bezel.
This year IWC introduced an entirely renewed Aquatimer collection. That literary means that ALL Aquatimer models have been redesigned and now feature the same design cues, and, more importantly, functional feats like the new Dive-Safe system; an externally operational internal dive-time bezel (still with us?) We tried the IWC Aquatimer Chronograph Edition „Expedition Jacques-Yves Cousteau” for some weeks for this review and liked it more and more during the test period.

The IWC Aquatimer Chronograph Edition Expedition Jacques-Yves Cousteau (a mouthful) is a special edition, based on the Aquatimer Chronograph. It features a recognizable blue dial that previous „Expedition Jacques-Yves Cousteau” also had. It commemorates Cousteau’s fantastic voyages and films that made millions aware of the beauty of the underwater world. His movies educated people around the world, about the underwater world, in times that most people didn’t have a clue about what was going on under that blue surface.
In 1967 IWC introduced the very first Aquatimer, which had a depth rating of 200 meters. The first Aquatimer adepts to similar style elements as used for many dive watches of that era. This is called a compressor-style case, featuring two crowns on one side of the case. One crown to wind the movement and adjust the hands, and the second crown to turn the inner diving bezel.
In 1982 they introduced the legendary Ocean 2000, designed together with the Porsche design team, and like the name already indicates, it has a depth rating of 2000 meters! At the time it was the first serial produced dive watch in titanium with a 2000 meter depth rating. Today it’s a highly sought after collector’s piece. During this period the ‘normal’ Aquatimer was not in IWC’s collection. The Ocean 2000 did not feature an inner diving bezel, like its predecessor, however an external one obviously served as inspiration for the new 2014 Aquatimer collection.
The Aquatimer re-appeared in the collection in 1997, as part of the legendary GST collection. GST stands for Gold, Steel and Titanium and IWC was a pioneer in using titanium as material for watches cases and even bracelets. The new Aquatimer features an external dive bezel, like the Ocean 2000. Two years later, in 1999, IWC introduced another iconic dive watch: the IWC GST Deep One. This was IWC’s first dive watch with a mechanical depth-gauge.
In 2004 IWC introduces an entirely new Aquatimer family of watches. All models feature an inner diving bezel, which is operated through a dedicated crown.

In 2008 IWC celebrated its 140th anniversary and introduced the Vintage Collection, which comprised of six ‘founding legends’ including a re-issue of the very first Aquatimer. The re-issue featured an inner diving bezel, like its predecessor.

2009 marks the year that IWC presented an entirely new Aquatimer collection, and again without an inner dive bezel. The inner diving bezel and IWC have a bit of a love/hate relationship. While the brand recognizes the importance, both functionally as well as aesthetically, it remains a difficulty in production and service. Together with the new Aquatimer family, a new version of the iconic Deep One, now called the Deep Two, was introduced.

This year IWC brings back the inner rotating dive bezel, that is now for the first time operated by an external rotating bezel. The all new 2014 Aquatimer family features this very user-friendly diving bezel. Also a third version of the dive watch with mechanical depth-gauge is introduced: the Deep Three.
The Aquatimer is a robust watch, and the model we had for review came on a black rubber strap. It’s a large and sporty chronograph that goes well with a casual or sporty attire, but shouldn’t be worn with jacket & tie. The stainless steel case on a black rubber strap and the dark blue dial, just looks pretty awesome. It’s not extremely distinct, however it stands out just enough to be noticed; we got quite a few positive comments, “out of the blue”, while wearing the Aquatimer Chronograph Cousteau.
Without being very distinct, without loud colours and without any showy design feats, the IWC Aquatimer Chrono Cousteau DOES stand out. And people notice it and even make(positive) comments about it. Is that maybe typical IWC?