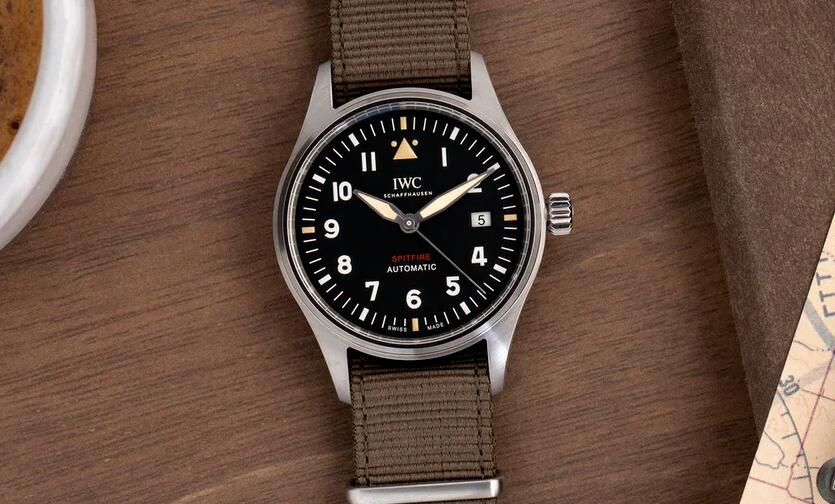 My first thought upon receiving this watch for review and double checking its price was that the IWC Pilot’s Watch Automatic Spitfire is a very nice value, almost to the point that I considered shifting gears and writing this post as a Value Proposition, because I think it could certainly be covered from that angle. It makes me very happy to write that, because it takes me back to a time early in my watch journalism career, in the mid-2000s, when one of the qualities I most often associated with IWC was value for money. After all, IWC is the brand that gave the watch world its first affordable splits-second chronograph and an affordable-ish grand complication. The no-nonsense IWC tool-watch style that was there from the early days feels especially present in this product. As configured here, the IWC Pilot’s Watch Automatic Spitfire costs just $4,450, and for that you get a whole heck of a lot.
For less than $5,000, you get a new in-house automatic movement, the cal. 32110, and it comes with a power reserve of 72 hours, a meaningful length of time that respects the watch enthusiast. The movement also has a silicon escape wheel and lever. I like to think that by giving you a reserve of 3 days, the watchmaker understands that you probably own other watches, and you may want to switch them out from time to time without resetting the time and date. (Having said that, this is a watch that I think I would want to wear a lot.)
You don’t get to see the new movement, of course. The back is closed, a fact necessitated by the soft iron inner case enveloping the movement and protecting it from the magnetic fields in our daily lives. This method of shielding a mechanical movement with an inner iron case is a time-tested one that IWC has long used in its Pilot’s and Ingenieur lines, though in an age when movements from certain brands are becoming increasingly amagnetic, the iron inner case has begun to feel a little bit anachronistic. Still, I’m comfortable with the Automatic Spitfire’s diameter-to-thickness ratio even with the inner case. As for the closed back: I’ll take it. The Spitfire Automatic is a watch with undeniable vintage appeal, and to me, that closed back is just part of the package. If the lugs were fully drilled through, though … that would make this watch darned close to perfect.
At 39mm in diameter and 10.8mm thick, the new Automatic Spitfire isn’t the smallest watch in the IWC Pilot’s collection, and it’s far from the largest. It might be the perfect size. On the wrist, the 39mm Pilot’s case wears like a dream. I wouldn’t want a modern pilot watch like this to be any smaller. The thickness of 10.8mm allows plenty of room for the extra padding that comes with wearing a sturdy textile strap like the one you see above. It shares its 39mm diameter and 10.8mm thickness with another high-profile IWC release from last year: the Pilot’s Watch Mark XVIII Edition “HODINKEE.” Both of these watches are a hair smaller than the conventional automatic Mark XVIII, which comes in at 40mm x 11mm.
The IWC Spitfire still holds a special place in my memory, despite the fact that I haven’t owned one. One of the first watch launches I ever covered – the second in fact – was that of the IWC Pilot Spitfire that dropped back in 2006. Those Spitfires, which featured stylized metallic dials that resulted in a look that I think could be best described as “new vintage,” were quite a bit different in design from the watch we see here. The current Spitfire lineup was inspired by the cockpits of Spitfire planes, and these dials have a depth and texture that is reminiscent of watches from another time. The black dial with lume offers superior legibility in addition to being really photogenic. In my short time with it, I found myself repeatedly looking at my wrist as I went about my workday. Say what you will about fauxtina, I think this execution is fantastic.
There are a few different configurations of the Spitfire Automatic. You can get it as you see here, in stainless steel with the excellent textile strap. You can have it in stainless steel with a very nice calfskin strap. And you can also buy it in a bronze version that comes on a calfskin strap. Bronze is a popular watch material these days, and its ability to patinate over time is something that appeals to a lot of watch buyers who want to put their own mark on their watch. IWC doesn’t demand a big upcharge for the bronze-cased version. That one still manages to squeak under the $5,000 price barrier, which I think is a significant psychological line for many watch buyers to cross. Still, for me, the steel version is the winner. Then it comes down to the choice of strap. In steel, both the textile strap and the brown calfskin strap-equipped Spitfire Automatics cost exactly $4,450. You might think that the calfskin strap is the logical play, but I’m not so sure about that. The Spitfire sings on its factory-supplied textile strap. The configuration you see here is my overall top pick.
The Replica IWC Pilot’s Watch Automatic Spitfire. Case: 39mm x 10.8mm stainless steel with solid caseback and screw-in crown. Water resistance to 6 bar. Soft iron inner case protecting movement from magnetic fields. Movement: new in-house IWC cal. 32110 running at 28,800 vph in 21 jewels, 164 components, 72 hours power reserve, central hacking seconds; silicon lever and escape wheel. Dial: Black with lume. Strap: Textile strap with stainless steel buckle.